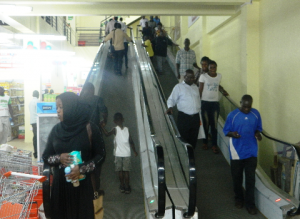 Thrilled Kisumu shoppers have since Tuesday visited Kenyatta Avenue’s new Naivas supermarket not to shop but to go up and down the escalators, the first ever in the city.

Naivas unveiled the new supermarket on Tuesday, residents from all walks of life flocking to it as soon as news of ‘rolling stairs hit the streets’.

Adventurous shoppers made straight for the escalators to get a feel of them, the skeptical lot observing from a safe distance. There was drama as both the young and old slipped and fell. Some struggled to show their ‘prowess’ in using the escalators, relatives and friends cheering them on to the staff’s utter surprise.

â€œThis machine is God-sent to this town. We are happy to have it in Kisumu for the first time,â€ a shopper, Michael Omondi, said.

Omondi said many people in the town would prefer the supermarket to familiarize themselves with the new â€œgadget in town”.

Regina Atieno had visited the outlet with her three year-old daughter: â€œMy daughter says I better bring her to Naivas instead of taking her to the usual children swings in the town,â€ she said.

There was however a group of elite shoppers who showed off going by how easily they used the escalators, and the â€˜swagâ€™ they displayed while seemingly giving the others disapproving stares.

Naivas business development and marketing manager Willy Kimani, speaking during the Tuesday launch, said Kisumu has great potential despite the existence of the other supermarkets in the area.

Kimani said the opening of a branch in Kisumu is in line with Naivas supermarket’s plan to have a nationwide presence.

Adapted from the Star