In the Photo Star Newspaper reporter Oliver Mathenge (centre in a cap) with his then fiance Citizen TV political reporter Jaque Maribe and President Uhuru Kenyatta (then deputy Prime Minister) at Great Rift Valley Lodge for a birthday bash.

By Faith M via Facebook
Recently, ICC protested that confidential filing has been leaked and ICC Judges warned Kenyan Government that necessary action will be taken:-

“The Chamber notes with concern the Kenyan
Governmentâ€™s cumulative inattention to the taking of appropriate measures to ensure the confidentiality of the proceedings, including by leaving confidential information unredacted in its proposed public-redacted version, by exercising insufficient care in how this proposed version was filed, and by its reference to confidential information during a public status conference.The Chamber underlines that this occurred despite having been recently warned of the seriousness of such an breach and despite the Kenyan Governmentâ€™s assurance that it would â€˜proceed with the appropriate and necessary cautionâ€™ to avoid such occurrences happening in the future. Separately, the Chamber notes with concern what appears to be a pattern of information contained in confidential filings being leaked to the media, in some cases even before the filings have been notified to the Chamber, parties or participants.”

And now they intend to indict The Star Newspaper reporter Oliver Generali Mathenge over the matter. The journalist wrote stories that the ICC believe they were leaked from the confidential filling. The stories he’s being accused of are:

1. AM Blamess AG tells ICC By Oliver Mathenge for the Star

2. AG Githu Muigai accuses Bensouda of dishonesty on Uhuru data By Oliver Mathege for the The Star 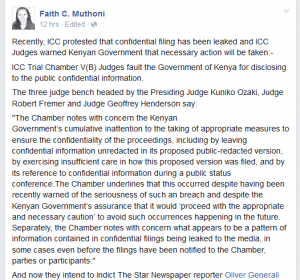