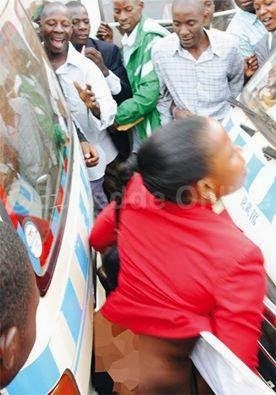 By R Nyabuto
Touts striked again as another video of a girl being forcefully stripped naked hit the internet and instantly went viral. It is becoming an issue of national concern and President Uhuru Kenyatta MUST speak out.

Unfortunately, the men stripping women are indirectly helped along by screaming women, (who are probably jealous of how their fellow women are dressed) thinking they are doing the right thing.

It’s going out of hand and the president of Kenya- Uhuru Muigai Kenyatta and His deputy William Samoei Ruto need to not only speak about it but condemn these acts as well in the strongest terms possible!

The Inspector General of Police Mr. David Kimaiyo must of necessity issue orders for all these men and women to be arrested and charged with attempted RAPE and indecent assault! Because that is exactly what they did to these women.

Something needs to be done and done urgently! Who decides how decent or not one is? Whats the measure for decency? Nobody has a right to tell anyone what to wear and how to wear it! Everyone has a choice! Just as WE men have a choice! Nuff sed!