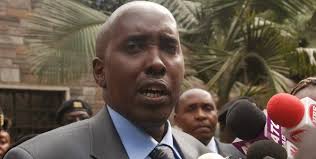 LAMU COUNTY: Interior Cabinet Secretary Joseph ole Lenku faced a hostile reception as he landed in Mpeketoni, Tuesday morning hours after at least ten more people were killed by unknown attackers. Lenku who was accompanied by Inspector General of Police David Kimaiyo, Principal Secretary Mutea Iringo among other leaders were booed when they landed at Lake Kenyatta Secondary where they were expected to address locals.

It took the intervention of Lamu West MP Julius Ndegwa to calm the residents before ole Lenku could make a brief statement. In his address, the Interior Cabinet Secretary announced the removal of Lamu County Police Commander Leonard Omollo and also repeated Mondayâ€™s assertions that the killings were politically motivated.

Lenku said the attacks could be the works of certain people who do not want a certain community in Mpeketoni. In their chants the residents were saying they are ready to protect themselves since the Stateâ€™s security system had collapsed.

The top security team left Nairobi for a brief tour of Mpeketoni Monday evening before flying to Malindi where they spent the night. The same night at least ten people were killed in Poromoko village some kilometres from Mpeketoni town.