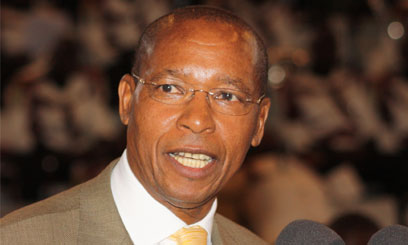 BY MARTIN MUTUA for the Standard

Doctors investigating the sudden death of Makueni Senator Mutula Kilonzo have solved most of the mysteries surrounding his death last month, we can reliably report.

Their findings are now only being held back awaiting completion of specialised tests of samples of his liver, which was found to have unusual damage. Reliable sources say samples of body hair are also being inspected abroad for poison. The bloody vomit, stomach contents and other samples tested at the Government Chemist laboratories in Nairobi, however, all showed no sign of any poisons.

Lab sources we cannot name because they are not authorised to reveal details of the pathology and toxicology tests say the probable cause of death appears clear. Mr Kilonzo, who was 64 years old, died on April 27 this year at Valhalla, his home on the expansive 1,500-acre Kwa Kyelu ranch in Machakos County.

Impeccable sources told The Standard On Saturday that samples of bloody vomit taken to the Government Chemist for testing had not revealed any known toxin.

â€œHowever, it was explained to us that Mutula was being treated for tuberculosis by his doctor,â€ added laboratory sources. â€œThat was the reason for the blood.â€ Nail scrapings showed no foreign DNA from skin or blood, which would have suggested physical contact with another person in a struggle.

Tests of food items found in the former Cabinet ministerâ€™s home also found no sign of poison. Samples were checked for radioactivity to rule out poisoning with agents like polonium-210 allegedly used in the separate killings of Palestinian leader Yasser Arafat and Russian defector Alexander Litvinenko. The tests were negative. Samples of body hair are being tested to rule out poison completely. Test results shown to us show Mutulaâ€™s blood had traces of sildenafil citrate, used to treat high blood pressure or in male products like Viagra and Levitra. It is not immediately clear if this has a bearing on the cause of death.

Pathologists seeking to confirm the findings of the preliminary autopsy are zeroing in on Mutulaâ€™s liver, which was described as curiously â€œdryâ€. They now hope to establish whether an unknown â€œdesigner poisonâ€ or ordinary medication administered over a period of time caused the damage. â€œThe liver looked dry as if it had been burnt,â€ says a source that attended the post-mortem exam on April 30. â€œ(Mutula) was not a heavy alcohol drinker; if he had been, then the liver would have been swollen with fat around it. The tests in the UK will establish whether there was a designer poison or not.â€

Dr Ian Calder, a sudden death pathology specialist hired by the Kilonzo family, is supervising the tests of the liver and body hair samples. Many of the more than 100 samples collected by police, however, are unlikely to be tested at all.

â€œPolice swarmed us with over 100 samples including his pajamas, underwear, blankets and other things which are not necessary,â€ our source added. This appears to be an overreaction to criticism over the number of samples collected in the crash that killed Prof George Saitoti, then Internal Security minister. Many of the samples are now stored to await the release of the report and possible re-examination in the event of a dispute. Mutulaâ€™s body was embalmed before his burial so no further samples can be taken from it for investigations.

Ironically, some sources at the Government Chemist complain pathologists took â€œinsufficient specimensâ€ during the post mortem examination. They say instructions outlined on the back of Police Form 23A (the standard post mortem exam form), taken from Section 386 of the Criminal Procedure Code, were not followed.

â€œInstead of them supplying us with the entire specimens, they took pieces of all the parts,â€ our sources claimed. The instructions require the complete stomach, tied at both ends, to be presented as a specimen. While the liver, kidney and upper intestines are also required whole, pathologists can provide â€œgenerous samplesâ€ or â€œas much as possibleâ€. Sources at the Government Chemist claim only a piece of the former ministerâ€™s stomach was given to them for testing. â€œThe piece we tested had no poison butâ€¦ other pieces not tested could have had different results,â€ added the sources. No samples of the vitreous humuor (fluid in the eye) or brain matter were provided for testing. Tests on a packet of peach juice found in Mutulaâ€™s bedroom showed no poison but the Government Chemist was unable to compare the sample with a pure one.

â€œWe attempted to look for a similar type of juice to compare it with but there is none like that in any of the supermarkets in the country,â€ our sources said.

The late Kilonzo was found dead at Kwa Kyelu on the morning of April 27. Suspicions immediately surrounded his sudden demise with family, friends and acquaintances all testifying that he was â€œin good healthâ€. None of them spoke of treatment for tuberculosis, which is sometimes associated with sudden death. An autopsy was carried out in the presence of nine pathologists, including Chief Government Pathologist Johansen Oduor and Dr Calder for the family. The team declined to release their findings saying they would await toxicology tests that would take â€œeight to ten weeksâ€. Dr Oduor and his colleagues were recently criticised for not waiting four weeks for toxicology reports before releasing the results of a post-mortem examination on Prof Saitoti. The test results made no difference to the finding he died from injuries sustained in a helicopter crash.