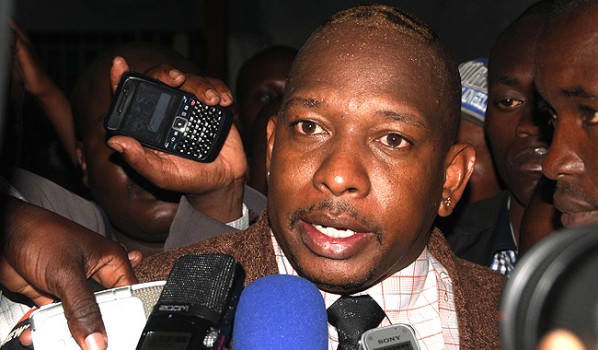 Nairobi Senator Mike Sonko has responded to allegations by a Ms Josephine Wanjeri Thuku that he neglected her and a child they bore together. Senator Sonko refutes Wanjeri’s allegations, insisting he has been a responsible father who’s taken care of his son, including the woman’s other son, in ways ‘few men can ever achieve’.

Sonko blames the woman for her woes, claiming she has multiple sex partners, some of whom she brings to her house where her two sons live.

The Nairobi Senator, who agrees he sired the son with Wanjeri in 1999 ‘before he was famous’ but already had his money, says Wanjeri is an irresponsible woman whom she has on several occasions bailed out from self-inflicted bankruptcy including opening for her a cyber-cafe business which the woman run down due to lack of discipline.

The woman fucks around in Mombasa.

Sonko also reveals he bought the ex-girlfriend a vehicle, Toyota Noah, which the woman crashed while drunk driving and was written off. He went and towed the vehicle and repaired and now it is in Nairobi. And the woman wants it back!

“I will prove her wrong in court. I have all the evidence to counter her allegations,” says Sonko.

Here below is Sonko’s response to Wanjeri:

Watu wangu habari ya Kenya. Nimeona once again I have been sued by Miss Josephine Wanjeri Thuku for allegedly neglecting two of her kids. This is the side of my story someni and guide me: Yes itâ€™s true She was my girlfriend & We got a kid with her way back in 1999. We later parted ways and she got married to Mr. Webb a clearing & forwarding agent in Mombasa.

The two were blessed with a kid Steve Maina. Later on they also parted ways with Webb and she started a new relationship with a military guy in a â€œcome we stay relationshipâ€. I’m fully responsible for the upkeep of my Son who’s now a big boy in class 6 and Iâ€™ll never deny him.

To prove my support for the upkeep I started a very big business for Josephine, a cyber cafe in Mombasa at a cost of 1 million Kenyan Shillings, but she mismanaged the business by using the income from the establishment to go for drinking sprees and she later sold the business. She Relocated to Kwale County but I continued to support her and my Son. Sometimes I also used to support her step brother (Steve).

I also bought a plot for my kid in Kwale town and I gave all land documents to his mum. I then gave Josephine capital for another business but unfortunately she sold everything with the influence of her bad company and drinking pals. I was doing everything for my son through her but I later stopped sending her cash directly because she was taking advantage of the situation and she started abusing whatever I as giving her.

I have all documents to prove all these facts and I am ready to produce them in Court. Whenever I send her cash she uses the money to entertain her boyfriends. I bought her a new Toyota Noah KBQ 499N for picking & dropping my kid to school but she misused the vehicle by using it for leisure while my son was walking to school. One morning at around 3:00 am while under the influence of alcohol, after coming from a night club in Diani she rolled several times with the car which was written of and dumped at a garage.

I was angered by her behavior of openly misbehaving even in presence of her own kids at some point even taking his boyfriends to spend the night in the same house she stays with her kids. I remember one day when I sent my driver to take some cash to her, he found another of her many boyfriends: an inspector at Kwale prisons, Bernard Muthoka in her house. The information angered me and I personally went to confirm the incident but when I entered her home the prison inspector escaped using the back door.

I went to his bosses to find out what he was doing in Josephine’s house at 1am and he was instead transferred from Kwale to Kitale. After that incident I started sending school fees direct to my kidâ€™s school instead of sending to her. I also send money for their shopping direct to Nakumatt Managers at Nyali and Diani branches.

I have the receipts of the school fees I am paying for her son as well as Mpesa statements between myself & Nakumatt managers. He’s also being misled to blackmail me by his brother who at some point I used to pay for his daughterâ€™s school fee at Mary Leakey High School.

Why would I care of many orphans including the Sinai fire tragedy victim and neglect my own kids? In my house apart from my biological daughters, I also stay with 4 children who are orphans. They are: Nelllius Wangare who I adopted when he was in class five and heâ€™s now a student at Moi University, Janet Kangi who came while in class to but sheâ€™s now in form one and the Likoni terror attack victims Gift Osinya now at Ruiru academy and his brother Santrin Osinya. I rest my case. But I want to take care of Josephineâ€™s son in my house instead of her misusing money for his upkeep.