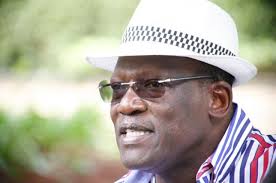 A group of Federation of Women Lawyers activist, including lawyer Judy Thongori and Ann NJogu, were Tuesday detained in the home of Machakos Senator Johnstone Muthama for hours after they entered the home without senator’s approval.

The group drove from Nairobi with journalists as part of a group that was to help the senator’s first wife Agnes Muthama try and resolve a marital dispute that has been troubling the couple for years.

They were welcomed at the Machakos home in the afternoon after listening to the woman’s side of the story.

But on their way out, the guards locked the gates after instructions from Muthama and demanded they explain why they had visited and the senator was not expecting them.

A source privy to the marital problems told reporters that the senator has built an alternative home for Agnes but she has refused to move to the new home.

Her refusal has prompted the senator to demolish the door to the home and remove parts of the roofing material to force Agnes out of the home, but she has stuck to her guards.

The source said that Muthama intends to convert the home to his county political headquarters where he can hold meetings with political friends and Wiper party workers.

Agnes, herself a preacher, told reporters a group of activists who had visited offering help were detained. She added they were later released.