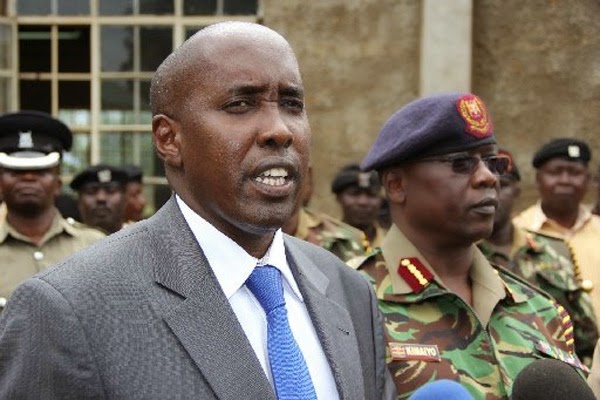 Sometime in March this year when the plot to appoint Joseph Nkaissery as interior cabinet secretary was gaining force, an embattled Ole Lenku threatened him with dire consequences. This is how a reporter chronicled the story.

Speaking for the first time after the recent Cabinet meeting with President Uhuru and Deputy President William Ruto during a five-day retreat, Lenku warned Nkaissery against “poking his nose into the security docket”.

He said he was not appointed by the government by default but by the trust it had in him. Â Lenku answering Nkaissery’s alleged remarks that he is unqualified to hold the docket. He said the remarks are inconsequential and he needs not respond to them.

â€œWhy should I respond to his remarks? I feel they are inconsequential and below my status as a national leader. He is only the Kajiado Central MP and I serve all Kenyans and not the Maasais alone,â€ Lenku said.

He was speaking during his homecoming party and that of nominated MCA Samson Tipape at Oloilalei Primary School in Loitokitok sub-county on Saturday. Â

Lenku said all the Masasai leaders who have served the government in the previous regimes have never let Kenyans down. Â

â€œFrom Julius Sunkuli, George Saitoti and Katoo ole Metito, the country stayed steady while they were security ministers, why me now?â€ I’m a national leader and I want to tell Nkaissery that I measure to my position in the government,â€ he said. Â

He said the President and Deputy President mandated him to roll out security structures and fight insecurity with all his might. Â

He said chiefs and their assistants will also be considered for transport arrangements.