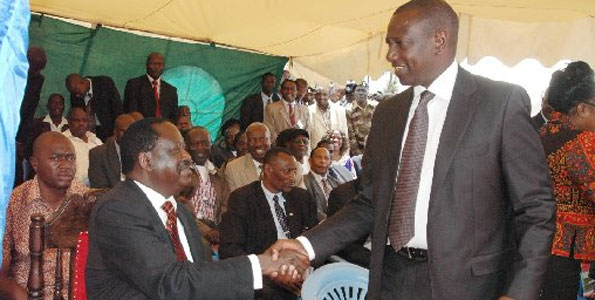 Ruto’s road to State House, even though laced with a cache of â€œexplosivesâ€, is plausible. However, it depends on a host of factors. The first hurdle would be his case at the ICC. This is the most tricky box, because out of it are only two options, being jailed, or being acquitted. Legally, the odds of Ruto being jailed increase, mainly driven by the quality of material evidence available to Bensouda, which is basically that he was in the opposition bad books at the moment the Waki evidence was being compiled.

If Ruto is jailed before 2017, or Uhuru gets acquitted, then a â€œnothing-to-lose-TNAâ€ becomes interested in using ICC as a tool to instigate the blockage of Ruto bid on account of eligibility for office then that may be the tragic end of a â€œRuto epic journey to the presidencyâ€. The second problem would be how Ruto isolates Raila to his shores of Luo Nyanza stronghold, and then sweeps the rest of the non-Gema territory. Itâ€™s a tall order, but his recent forays using Harambees as seen at Ranen SDA church in Migori, and then you see Kidero being praised by the Kisumu crowd for his â€œMaendeleo and Harambeeâ€ politics, there seems to be an embrace of the deceptive rightwing politics of Maendeleo by Nyanza.

That tectonic shift in Nyanza may keep Raila busy putting off the â€˜Harambee/ Maendeleoâ€™ embers stoked by Kidero et al while Ruto gets enough time to galvanize the rest of the CORD 2013 territory behind him, now that he is excused from continuous presence at ICC. Recent reports indicate that Ruto is laying a political network in CORD leaning regions in Coast, Western, Kisii, Ukambani, North Eastern, and Upper Eastern in readiness for a stab in 2017.

A clean sweep in these areas would push Ruto to the second round while eliminating Raila from the second round contention. Then if he can hold Uhuru to the Mt. Kenya region, and entice the orphaned Nyanza as the better evil, Ruto may romp home to victory in the second round in 2017. Thatâ€™s assuming the â€œwounded Odingaâ€ and Kenyattas donâ€™t unite in second round in a â€˜survival of the dynasties dealâ€™. Third is the timing, acrimony and the narrative with which the wrangles-intensive Ruto breaks up Jubilee.

The starting point is to poison the masses against Uhuru and his ethnic outfit TNA, just like he did with Mau. And donâ€™t be surprised if Alfred Keter is actually part of a Ruto strategy to do his wrangles using surrogates in a fashion different from the Raila/ODM bareknuckle approach during the Kibaki Grand Coalition era. The Nandi Hills MP maybe the DPâ€™s boxing glove assigned to prepare the ground for an eventual epic duel for a URP instigated â€œJubileeâ€ disintegration.
Charles Keter used to be that messenger, but as a confidante, the DP may have changed tact because Charlesâ€™ pronouncements were viewed as Rutoâ€™s opinions in private. And maybe that is why the other Keter was roped in. I donâ€™t know, but it could be shrewd politics. And while the narrative and lies propagated during the Ruto- Raila ODM wrangles revolved around the Mau forest and ICC fixing claims whose target audience was the Kalenjin, URP narrative in its imminent Jubilee fallout( matter of when not if) should target the larger non-TNA political territory, if at all Ruto is to â€˜de- Kalenjiniseâ€™ URP in readiness for 2017.

URP could execute its divorce with TNA in a way that transforms Ruto into the symbol of anti-TNA rebellion which would isolate Uhuru to the traditional Kibaki DP stronghold around the foot of Mt Kenya. And if his timing is brilliant enough, Ruto thekKingmaker could ride on that momentum towards his own coronation in 2017. Rutoâ€™s spell of doom for Kenya is because he belongs to a cabal among Kenyaâ€™s political elite, who are poetic in preferring to â€œperformâ€ without â€œreformâ€. This is the Kenyan neoconservative axis that is inherently â€˜Kanu damuâ€™ but which has chosen to drape the Jogoo in Jubilee coalition clothes.

Rutoâ€™s ride to State House is on an â€˜unapologetic puritanist rightwing platformâ€™, mainly driven by what the Moi students call Maendeleo, a word that has been harped for the last 50 years but is yet to deliver a middle income, industrialised nation. This Maendeleo â€œmanifestoâ€ is one that emphasizes physical white elephant projects but ignores the emotional and human elements of nation building

Ruto â€œthe digitalâ€ has been candid about being disinterested in institutional and constitutional reforms and in fact campaigned against the current Kenyan constitution billed around the world as the most progressive. And thanks to the relentless efforts of this conservative axis, Kenya is poised to have in State House; a person who in 2002 Kibaki inauguration ceremony was pelted with mud at Uhuru Park. And now working on a PhD, Ruto if he graduates before 2017 will be the first PhD holder of Kenyaâ€™s presidency

Fast forward to 2017, and a Ruto presidency is an imminent possibility and would be the culmination of doom for the unprincipled, divided and flip-flopping Kenyan left which has failed to distinguish and rebrand itself into a progressive and formidable political force.

A sustained rightwing social re-engineering and propaganda intensified in the Kibaki era brainwashes the 21st century Kenyan voter to be indifferent to a Ruto presidency; despite his well documented track record of court cases and mentions in scandals since his Kanu days.

Ruto, the â€˜poster childâ€™ of Kenyaâ€™s Right will become President if the ICC doesnâ€™t stop him, not because of his own commission, but because of the Leftâ€™s omission. He may kick Uhuru out of State House, but will Uhuru men swear him in?