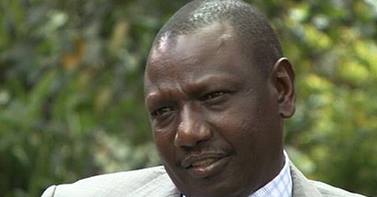 Realizing his career shuttering mistake, Deputy President William Ruto yesterday moved in to control the damage after he was confronted by the powerful forces his legal and political teams have recently claimed must leave the government over allegations of â€˜fixingâ€™ him â€“ Of course Ruto was fixed, but not by those he, and his co-accused President Uhuru Kenyatta spent two years in prayer-cum-political rallies calling all manner of names.

For the umpteenth time, the name of Raila Odinga, the former mainstay of William Rutoâ€™s political cunningness, continue to fade from the ICC debate as the Deputy President seeks out for new political enemies, and community battles to wage in Kenya.

Already, he chose the usual marked route â€“ Senator Charles Keter â€“ to test the initial waters of a marriage that was always going to be turbulent. It is not lost to long term followers of ODM that it was the same Charles Keter, then Belgut MP whom Ruto used to stoke the initial fires in ODM, a party which had accommodated every demand of William Ruto.

Ruto said it was â€˜unnecessary and unhealthyâ€™ for leaders to engage in such talk and urged them to instead work on uniting the country and deal with the challenges facing Kenyans. He described the ongoing debate on who â€œfixedâ€ him as â€œimmaterialâ€

Some of Rutoâ€™s allies in URP led by Kericho Senator Charles Keter have been demanding that some of the key individuals currently serving in the executive be sacked.

On Wednesday Rutoâ€™s lead defence lawyer Karim Khan dismissed a request by Interior Principal Secretary Mutea Iringo that he apologise for making the claims that he is among those who â€˜fixedâ€™ Ruto.

Iringo said Rutoâ€™s legal team owed him an apology for the claims but Khan responded by saying that his team was only telling the truth to the court.

During one of the hearings before the case was adjourned, Rutoâ€™s defence team had claimed that Iringo and State House Chief Political Adviser Nancy Gitau had procured witnesses against Ruto at the Waki Commission.