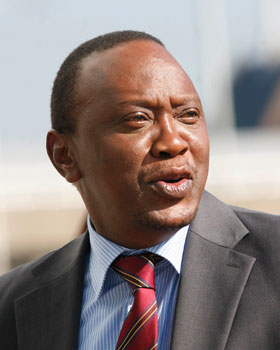 Why Uhuru Will Be Acquitted

In Aug 31, 2013, right in this online daily, I observed that â€œafter perusing though the evidence as possessed by Bensouda, Kamwana will be acquitted, 80:20 chances, as his DP gets jailed 95:5 chances, and that would be a game changer in Kalenjin politics, and Kenya as a whole. Uhuruâ€™s government will go on without Rutoâ€. And today, in conclusion of that prophesy, ICC prosecutor Bensouda agrees with me. She promises to drop Uhuru charges if no new evidence emerges.

I know Ruto thinks, Kenya will collapse in his absence. No Kamwana- once Ruto is jailed- as was demonstrated in his tour of Rift Valley, in which he swore to never relinquish power to URP in 2017, will continue to demonstrate that he is the man on the steering wheel, and that Ruto is not even the co-driver (Joseph Kinyua- the de-facto Deputy to the President is).

And Bensouda appears to suggest that she has sufficient evidence against Ruto not Kamwana. Quite consistent with when I said Ruto would be jailed. And there are many other reasons to do with diplomacy and compromise that I wonâ€™t delve into.

Just know this, if you are player in politics, prepare to take over the vacuum that a highly likely Ruto incarceration will create. And also Kenyans should prepare for what a scot-free Uhuru with a label of innocence from an international court would be capable of doing for them.

And any ambitious politician should plan for taking Mr. Samoeiâ€™s place as DP. Charles Keter, Mrs. Rachel Ruto, Isaac Ruto, Joshua Kuttuny, Gideon Moi, who? Alfred Keter, seems to be winning the hearts of Kalenjin electorate, and if he can put his game together, he would do so well in the Ruto succession.

Mudavadi was positioning himself for that possibility, but with the Amani shellacking in Bungoma, Kamwana would find Mudavadi a very risky bet, that would confine him to the dustbins of political defeat as he experienced in 2002.

My apprehension and comprehension is that as Uhuru squeaks his way out of the ICC, Kenyans would be exposed in the hands of a leader who has seen it all, through hell and back. A hardened leader, who defeated enemies of impunity. ICC has been playing an important role of checking the conscience of Uhuru and Ruto.

With their cases pending, the ICC duo would hesitate ordering a shooting rampage in the streets, but with ICC gone out the window, and with him controlling the 2 chambers of the house, and currently working on tightening his grip on the Judiciary, nothing moral or evil would prevent the Kenyan leader from subjecting Kenyans to anything that he wants.

And even with the ICC case hanging over his head, Uhuru continues to push for oppressive media bills and recent decrees point to attempts to interfere with the independence of the Judiciary.
Investors will soon begin to flee as URP wranglers like Alfred Keter create instability by blaming TNA for their leaderâ€™s predicament at ICC.

URP will in due course begin to caucus with CORD in a supermajority arrangement. Either that or, CORD would be talked into a Coalition arrangement with TNA if URP becomes so difficult. In politics donâ€™t put anything off the table. Or even this if Uhuru canâ€™t get Cord===TNA+Wiper+Amani+Cord rebel MPs should help Uhuru neuter URP rebellion in Jubilee.

And always remember, that TNA controls the instruments of the state, and therefore the custodians of ICC evidence. With Uhuru off the hook, I doubt the cabal around the presidency would fail to co-operate with ICC on the Ruto and maybe the Baraza case. I doubt Ruto and Uhuru care about each other, so much, that the latter would stand by his DP through thick and thin even after he is off the hook.

And always remember, that as the party controlling instruments of the state, TNA has the reach, the motive, the power and the ability to line up witnesses against the DP at the ICC once Uhuru is off the hook, as I have consistently predicted.

And itâ€™s that ability, power and motive to produce evidence/withhold it that continue to make this writer doubt whether Ruto agreed to be Uhuruâ€™s running mate and not Raila out of his own volition and conscience.

I suspect, and I insist suspect that he was arm-twisted.
PNU operatives who morphed into TNA defenders, controlled security apparatus in the Kibaki administration, as Rutoâ€™s Lawyers submissions as adduced in ICC confirmed, had the ability (am not saying they did), the power, the motive to intimidate and threaten Ruto to put his signature on the dotted line. The consequences for not working with TNA were sufficient and reasonable because more ICC evidence would have been channeled to The Hague.

And remember itâ€™s still TNA wing that would hand over Ruto if he is jailed. And donâ€™t be surprised, Bensouda might be looking at a way of securing at least one conviction, with the co-operation of the other. Thereâ€™s not a more strategic person to cut a deal with than the Uhuru defense team, with the hope of doing a plea bargain in exchange for unfettered access to ICC evidence and other articles of co-operation with the prosecution.