Double intake, also referred to as accelerated academic programme, was a policy effected in the year 2011 across several universities in Kenya, save for the University of Nairobi where students threatened to riot endlessly should it materialize.

The problems with double intake are numerous. Its major crisis, however, Â is the number of new students it admitted in public universities. Earlier, students would complete form four and transition after two years. Then minister Ruto, engaged then in a vain attempt to prove that he was ‘working’, directed all institutions to admit form four students within months after they got their results.

He would be fired but the new minister, Prof Hellen Sambili, lacked the magic wand to make Ruto’s policy work. Same happened to Kamar and we wait to see what Prof Kaimenyi, a fomer DVC, will acheive.

Here is the background:

The government, in anticipation of the 2015 cohort, the first batch of the free primary education beneficiaries, wanted universities to create room for the massive numbers expected. The result has been confusion, chaos and outright academic dishonesty. Lecturers no longer teach, universities no longer impart knowledge, and students no longer undertake in-depth studies. I will explain.

Initially, after each academic year, students would proceed for long vocations during which lecturers had time to mark all scripts and prepare course materials for the next academic year. With the accelerated programme, as one cohort left for home, the other arrived in college. The result was that the academic staff, few in number, got overwhelmed. There is no longer time to engage students ‘constructively’. A lot of reading is personal, with course reading materials (handouts) replacing active lecture.

Due to this, students have resorted to exam cheating. The idea, after lecturers left classrooms, is to pass the CAT or Exam. This comes at a greater cost to students as the industry (and there has been numerous complaints from employers) decry the ‘half-baked’ graduate. To day, very few students can comprehend concepts passed the examination. We graduate with first class honours still; or those high honours, but very few can defend the grade on the paper certificate.

Another negative effect of the Rutoism on higher education is the accommodation crisis. When President Uhuru recently visited Moi University the other day, he undertook to construct a 15,000 capacity hostel. Students just grinned. In most rural universities like Moi, Masinde Muliro, Egerton and Maseno, accommodation and security are siamese twins. Students are forced to live among villagers and in facilities which make every day studies a cumbersome affair. Students cook using charcoal, some use paraffin lamps and make out with USA(Ugali Sukuma Avocado) on everyday basis. Students get hacked, raped, beaten, mugged, murdered, and robbed every other day. Often, students let most of these sad events pass; but other times, they respond with violence.

You see, what the media covers is the violence. Images of vehicles burned or charged students carrying leaves and twigs and shouting and ranting. Rarely does the reasons for these strikes get an elaborate analysis. When police come in and a few students are arrested, or universities expel the so called ‘ring leaders’, the government conveniently avoids the blame.

Higher education is not what it used to be back in the day. Massification of knowledge, where universities admit students without taking cognisance of the bed space, lecturer space, lecturer -to- student ratio, course content- to- time allotment ratio and so many other things has ensured that university administrators only live one day at a time.

But there is a bigger problem. The sex and pregnancy and HIV/AIDs problem. What Ruto did was to take adolescents from high school ‘domitories’ and bring them to sleep in university ‘hostels’. In the dorms there were rules and regulations and matrons and boarding masters and ‘teachers on duty’. There were also dorm prefects and other prefects! At the university, all that disappeared!

Stories abound of students ‘fucked’ on day one! Because I represented students on universty disciplinary committees, I came close with harrowing atles of young female students, first years, who drunk themselves silly in the company of senior and more mature students who then ‘worked on them’ all night long. They could not remember saying ‘yes’ or ‘no’.

But is is insecurity which upsets students most. In Maseno, with no accomodation, students were said to be spending in tents. PICTURE that! Many live outside the university precepts, deep in the villages. Whenever one student is attacked; the rest retaliate not because they are robots who do not think or unaware of the rules but to send a message to those dangerous people who lurk in the shadows, “we will come in our numbers for you”.

Ruto’s programme has watered down higher education. With dwindling funding, occasioned by delays in Helb loan release, many students sit through the semester but do not take their exams. For all the talk about youth empowerment, the government seems oblivious of the tickling intellectual time-bomb that is the university youth.

Alcoholism and substance abuse is at its all time high. Prostitution is catching up. It is survival, stupid! Students are frustrated, lecturers are demoralised and this whole higher education is a big lie. That’s why more students are leaving assignments undone to form groups and think about ‘uwezo funds’.

With the ‘differentiated unit cost’, where the degree programme determines the amount you pay for education is soon being effected in medicine and engineering programmes, more students are bound to drop out of these degree programmes for the ‘cheap ones’.

If students accommodation, students security and teaching is not re-looked at; students will continue to stage very violent protests. I know this because I understand what goes on inside those ‘university’ gates. Ruto?

As the rant goes in such issues, ‘a comrade is always right’! 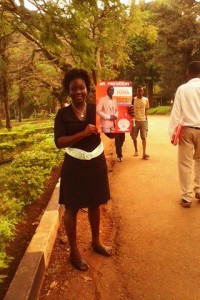