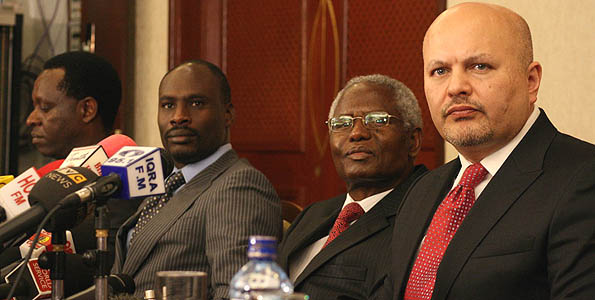 Soon to face justice Deputy President William Ruto is facing a life-threatening legal lacuna as his lawyer, the expatriate Karim Khan, who allegedly helped “terminate” both the witnesses and many murder and rape charges against Francis Muthaura, took his “dirty” trade to the wrong guy- the Western Kenya born Ken Wafula.

On August 12 at the Norfolk Hotel here in Nairobi, Mr Khan who represents high profile ICC suspects, wanted Wafula to be part of Ruto’s defense witnesses whose role will be to ensure the 2007 post-election war-monger evades justice. But Wafula, whose Eldoret based NGO has worked with victims of the post-election violence; many of whom still do not know where the children and loved ones were buried, said a BIG NO to Mr Khan, making William Ruto’s case a little complicated or an easy guilty-as-charged kind of walkover for the feared mother of justice, prosecutor Fatou Bensouda.

In the deliberations, Mr Khan; who is alleged to claim that the families and children burned in the Kiambaa Church were part of a blockbuster movie that was being screened in the area, hence the ICC is wrong to charge people who were only producing a film for the African jungle. But red blood was spilled, people were forcefully circumcised, and people lost their properties, land included.

In a signed affidavit dated August 17, Mr Wafula says; â€œâ€¦Karim Khan asked me to be a defence witness and offered to arrange all the necessary witness support and protection. My conscience is clear. I have (been) consistent and persistent in my clamour for justice for the victims of the post-election violenceâ€¦ I cannot deviate from that.â€

“He wantedÂ information on who funded the witnessesâ€™ protection, their names, location, families, their numbers, and how much was spent on each of them.Â But I declined to give him the true account,â€ Wafula says.

Khan, whose legal brief to the disgraced Muthaura, led to the disappearance of hordes of witnesses and others withdrew from the case after incessant threats on them and their families, sought to transfer his dirty tricks to the case facing Ruto. But he picked on a wrong son of a bitch who has lived his life fighting for justice for the downtrodden.

Khan, who has been accused by CORD as threatening Kenyans with life-ending text messages, was recycled by Ruto whose other lawyer, Kioko Kilukumi, bolted out of the ICC case.

“The lawyer also wanted to be given witnessesâ€™ documents, particularly their statements on when they were first threatened,” says Wafula.

Now that the legal hunter has become the hunted, Khan is now crying in Ruto’s kitchen where he was preparing some omelette, claiming the ever truthful Wafula is lying. But a search in heaven shows Wafula has never lied since he was born, and God has sent his angels to protect Wafula, whose name in heaven is in the same book with that of Elijah and the 24 elders.

Khan now says, “Am sure that Mr Wafula knows the importance of speaking the truth and the consequences of swearing false affidavits.â€ Yes, he knows, because he has spoken the truth all his life in Kenya and Africa.

This will be a bad case because Ruto may be hanged. Sorry Khan.