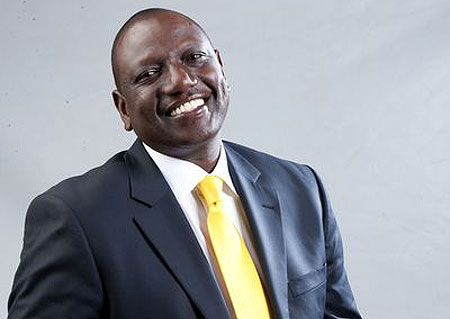 Deputy President William Ruto has finally re-acquired and sold off the land next to the National Social Security Fund headquarters which originally belonged to the prisons department. The land, according to sources privy to its history, had earlier been grabbed by the Deputy President when he served as minister during the grand coalition government but was revoked by lands minister James Orengo.

President Uhuru’s regime is facing serious allegations of not being able to protect people’s property, especially land, a charge which back in the day was often used to claim how CORD leader Raila Odinga was ‘unelectable’.

Those in the know are said to be taking cue, with most highly placed government racketeers also using proxies to hide their identities and beat the law. For DP Ruto, land grabbing appears to be a pastime activity, something he enjoys, going by the numerous accusations of him in various land sagas in the country.

Here is how Mavulture.com eulogises DP Ruto over land grabbing:

Humiliated into giving back parcels of land he acquired through dubious means in the past, Deputy President lacks moral authority to go after thieves

Â Deputy President Willian Samoei Ruto, the self-confessed hustler who has elbowed his way into the countryâ€™s political high table is many things rolled into one.

To his critics, Ruto is the embodiment of a gifted schemer with a capacity to craft deals which have earned him tidy sums of money, even though some of his projects have backfired on him, leaving his face smeared with dirt.

Â So when Ruto flanked President Uhuru Kenyatta recently to announce their quest to recover 500,000 acres of land in Lamu gifted to the 22 companies, it was not lost on Kenyans how ironic it was for Ruto to be spearheading the campaign.

After all, Ruto has been embroiled in a number of shady land deals and on more than one occasion, he was humiliated into surrendering prime lands he had acquired through dubious means.

Rutoâ€™s most recent run-in with the law was traced to the height of post-election violence in 2008/2009, in which over 600,000 people were uprooted from their homes and 1,000 killed. It was in that mayhem that Ruto took possession of 100 acres of agricultural land in Eldoret.

The land was originally registered in the name of Adrian Muteshi, a 70 year old retiree who had been displaced during the violence.

When Muteshi learnt that Ruto had appropriated his land, he went to court to reclaim it.

Then, Ruto was an Orange Democratic Movement insider and Eldoret North MP as well as the Minister for Agriculture. He flatly refused to give back the land, setting the stage for a David versus Goliath legal battle. He insisted to defend his acquisition of the land, claiming he bought it from its legitimate owner.

But on June 27, 2013, the court declared Muteshi was the rightful owner of the land. Rutoâ€™s title was cancelled and he was ordered to pay Muteshi Sh5 million.

Way back in 1995, Ruto, together with other well-heeled Kanu top brass, allegedly hived off part of Ngong forest. He later subdivided this land and sold it to unsuspecting Kenyans.

After Kanu was routed out of power in 2002, Ruto was arraigned in court and charged with receiving Sh9.9 million from Hellen Njau who was at the time the financial manager of Kenya Pipeline Corporation.

The charges stated that Ruto had received the money from Njeru pretending that he could sell her 1.75 hectares (4.375 acres) of land belonging to the Ministry of Environment.

He was also accused of having received a total of Sh86 million from two other similar land deals. Another well-placed Kanu bigwig, Joshua Kulei was similarly charged for excising and selling part of Ngong Forest.

One of the witnesses who was to testify against Ruto, was unavailable to give evidence. Consequently, Rutoâ€™s case collapsed and the star witness, Mary Ngethe, suspiciously landed a job at the defunct Nairobi City Council as a legal officer.

In an ironic twist, in October 2011, Ngâ€™ethe was one of the local Government workers later arrested for their alleged involvement in Sh283 million fraud case in which cemetery land was procured at an exaggerated price.

Way back in the early 1990s when Ruto worked for Kanuâ€™s youth lobby Youth for Kanu â€™92, he formed Oseng Company which was allocated 12 prime plots in Nairobi worth Sh100 million, previously designated as public utility land.

He used the property to secure a loan of Sh50 million, from Ajay Shah, who was at the time associated with the now collapsed Trust Bank and City Finance Bank.

When the Mwai Kibaki-led National Rainbow Coalition (Narc) took power in December 2002, Ruto quietly returned the land parcel on Processional Way, which was part of the 12 plots he had grabbed.

This explains why Kenyans remain ambivalent about Rutoâ€™s credentials, having been a culprit in past land grabs.

Ruto has in the past tried to account for his wealth. In December 2011, he explained that he had painstakingly invested in real estate and could account for each of his investments, which include Weston Hotel.

Then Ruto, who was gearing for presidential polls, posted the following on Facebook, after questions emerged over his wealth:

â€œI have paid mortgage since 1996, sometimes two or three mortgages for whatever properties I own. The records are available from the financial institutions and banks. I have painstakingly bought shares in companies including some that I have built up from scratch through sheer hard work. The records for these are also available.â€

Ruto is still to explain how he came upon the land next to Wilson Airport where he recently constructed Weston Hotel at a time other developers who encroached on airports and road reserves had their investments brought down by bulldozers.