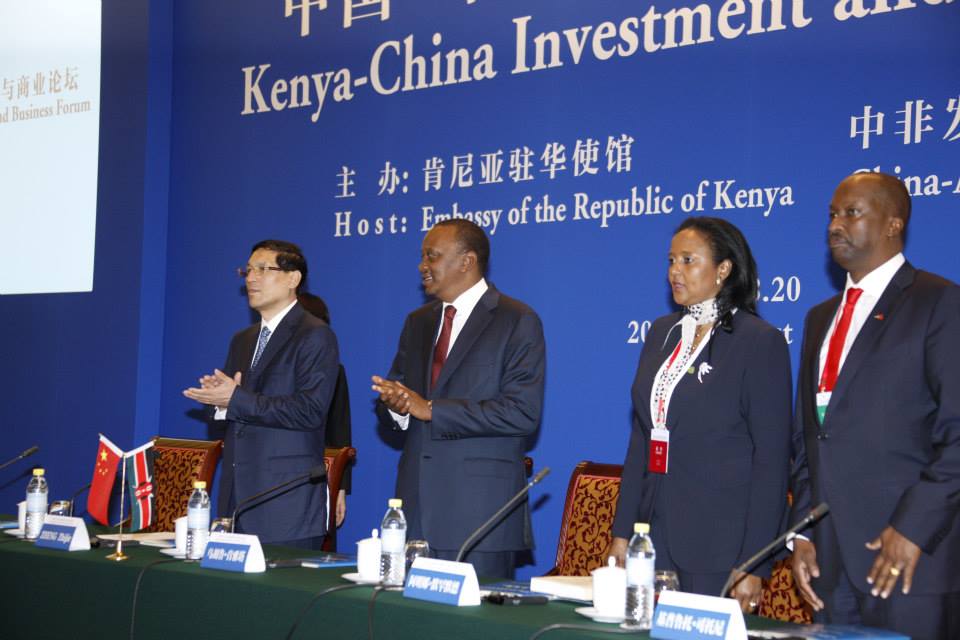 After the signing of the 425 Billion Shillings deal with the Chinese government, Uhuru was a happy man and decided to have dinner with the Kenyan delegation at Diaoyu. The dinner took place at Tai State Guest Villa where Kenyatta was staying.

Trouble began when Nairobi Senator Mike Sonko greeted all the secretaries on the high table but snubbed Transport Secretary Eng. Micheal Kamau. Sonko, still outraged by the decision of Kamau to send goons to and loot JKIA duty free shops told Kamau bluntly that he was part of the group hell-bent on giving the government of President Kenyatta a bad name.

According to Sonko, Kamauâ€™s orders precipitated the ugly events at JKIA which somehow led to the burning of the Airport and to which most of his constituents in Nairobi have since lost their jobs and sources of livelihood.

â€œSo enraged was Senator Sonko that it took the intervention of Kiambu Gov William Kabogo, Keter, Duale and others Â to stop him from slapping Kamau,â€ our source who accompanied the team revealed.

â€œThe demolition of the duty free shops will haunt you forever, you idiotic f33l,â€ Sonko shouted at Kamau as President Kenyatta, shocked by the turn of events, remained mystified on his Chair.

But the war of words was far from over, Senator Sonko reportedly told the leaders he intends to teach Kamau a lesson once they landed in Nairobi, claiming no one interferes with the livelihoods of his constituents and goes scot free.

The shaken Kamau never responded to the senator and it was evident that he had been shocked by the senatorâ€™s determination to ensure justice is done in the duty free saga.

After a short while the dinner proceeded smoothly and Sonko was seen chatting with other leaders and later even the president of peopleâ€™s Republic of Â China at the Great Peopleâ€™s Hall in the Beijing.

Later in the meeting, Sonko took his case to President Kenyatta whom sources said he persuaded the president to ensure justice is done over the JKIA saga. The Senator reportedly told the President those who steal public money should be killed, just as happens in China. The Senator urged the president to let his officers understand the importance of using laws to solve conflicting interests- be they political or economic.

Irked by the governmentâ€™s selective justice system and police interference, the Nairobi senator reminded the president that Pattni returned the Grand Regency then valued at 4.5 billion. . .that Deepak Kaman is still a fugitive for stealing 2.5 billion, yet Jay Shah stole 1.5 billion but still walks free in Nairobi.

â€œWe are all businessmen but the continued harassment of Pattni is not fair,â€ Sonko told Uhuru.

When contacted, aides of the Nairobi Senator told this writer that all their boss wants is for the law to be applied equally.

â€œSenator Sonko believes Kenya is ruled by laws, to go raid peoples business and houses is so archaic in this age and time,â€ said one of the aides. The report about JKIA is yet to be released.