A tour company versed with the terrain and ethnic demographics of the area attacked by gunmen has indicated that the attack isn’t terror related but a fight to access local resources. This allegation/revelation is reinforced by the fact that Alshabaab terror group have NOT CLAIMED RESPONSIBILITY for the attack almost 24 hours later, very unusual. 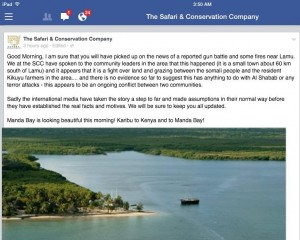 Whenever such attacks occur if carried by them (Alshabaab) they usually announce victory on their official twitter handle and Youtube Channel or often issue recordings to media houses claiming victory, so far Alshabaab have not confirmed if they are behind the Mpeketoni attack. 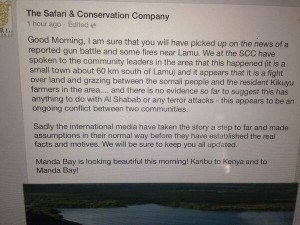 Mpeketoni is some 60km south of Lamu town.

It pits the upcountry people mostly Kikuyu/Kamba communities, whom locals see as ‘outsiders’ against the coastal Mijikenda and Swahili communities in the area. Reports indicate the fights are over the grazing land in the area, in general the scarcity of resources. Rise of poverty levels, unemployment and radicalization could be bigger factors.

A source online had this to say about the conflict:

In the ’60s (well I was not even conceived then and my parents did not even know each other), I am told that Jomo visited Mpeketoni area of Lamu and fell in love with it. He promised the locals that he would help their farming needs and that he would provide them with tractors to assist till their lands. The locals were very very very happy at Jomo’s kind gesture and were eagerly awaiting the tractors as promised by the President. Some weeks later, the locals were astonished to see lorries and lorries of strange speaking men and women of my accent instead of tractors. When the PC was asked to explain, he simply said that the president thought humans were more thorough in their work than tractors! I wonder if this conflict is about the tractors as I am told Mpeketoni is also known as Kiambu ndogo just as certain areas in some cities are known as Kisumu ndogo, Kabarnet ndogo, Mogadishu ndogo, Kitui ndogo etc. Could it be?