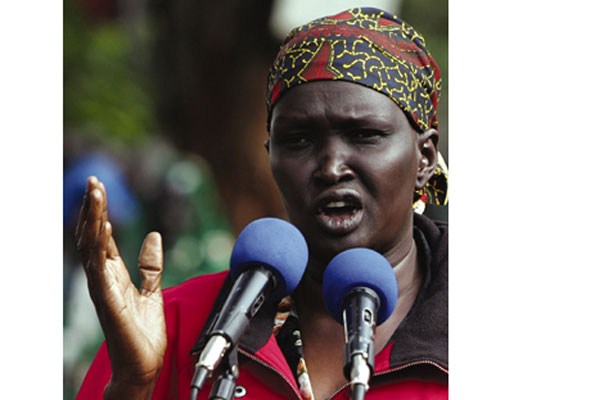 The sending of Ugandan troops to South Sudan was seen by the people of South Sudan as an â€œinvasionâ€. In the second and last part of his interview with Madam Rebecca Garang de Mabior, widow of Dr John Garang who is often referred to by many as the Mother of the Nation, our Editor Henry Gombya asked her what she thought about the presence of Ugandan troops in South Sudan and whether there was any truth in the allegations that former Vice President Riek Machar had tried to stage a military coup. Here is what she had to say:

Henry Gombya: Is there any truth whatsoever that former Vice President Riek Machar attempted a military coup in your country?

HG: What is your view about the sending of troops by Ugandan President Museveni to fight alongside President Kiirâ€™s troops against soldiers loyal to Dr Riek Machar?

RG: Yea. It is already a problem because the people of South Sudan are not very happy and when I met with President Museveni I asked him about it. He said what he did was to prevent a total collapse of this young country and the SPLM as a party. Thatâ€™s what he said he was afraid of. Secondly he said he feared that Dr Riek would capture Juba and that Dr Riek has not been a good leader. These are the two issues that he was saying. Although he later said he had been asked by President Salva Kiir to send his troops, but by sending over 3000 troops accompanied with helicopter gunships, this was seen by many as an invasion.

But I will not count this on Ugandans about our leadership because if our leadership had been strong, there would have been no other people coming to the country. But because of a weak government, thatâ€™s why things are like that.

HG: What role are you yourself playing now amidst all this chaos?

RG: Em! You know I am a victim. I lost my husband in this struggle and I lost my husband because of his love for the people of Southern Sudan and for their freedom and independence. And if I feel that these people are not getting what we promised them during the struggle, I will not keep quiet. I will always talk. I am a mother of these people, I am the Mother of the Nation, as they call me and if there is anything that is not going right, I will speak for the voiceless because as a government we are not delivering to the people what we promised them during the struggle.

It is very clear that what we fought against is what we are doing to our own people. We are intimidating our own people, we are killing our own people. There is no freedom of expression, there is no freedom of the press. Basic social services are not being given to our people, no schools, no hospitals, no roads, nothing. And we have resources. God has given us all the resources [we need] in our country and we are not doing all these things. So I speak out against that because there are people suffering in Southern Sudan.

And [it is said] weâ€™re among the poorest countries in the world. For me I will not believe that because we have all those resources. How come [then] that we are said to be among the poorest in the world? The problem is that the distribution of wealth is not correct; it is not equitable because this is the same thing we fought against with the North because we believed it is a division of development, the wealth and it was there in the CPA (the Comprehensive Peace Agreement â€“ a set of agreements that were signed between the Sudan Peopleâ€™s Liberation Movement (SPLM) and the Government of Sudan. The CPA was meant to end the Second Sudanese Civil War, develop democratic governance countrywide and share oil revenues. It further set a timetable by which Southern Sudan had a referendum on its independence) about wealth sharing.

But when we came after the interim period, we shoved the CPA instead of [using it] to resolve our problems. And the same issue which we quarrelled about with Khartoum which is wealth sharing and power sharing are the basic problems that we now have in southern Sudan.

So we should have used the CPA to take these two protocols and we use them because that would have helped in sharing power. Like you talk about nepotism, you talk about tribalism, human rights violations, you talk about all these things that are happening in Southern Sudan. That is why I am speaking on behalf of all those â€œright lessâ€ people and I am the mother of everybody.

HG: Excuse me for taking you back to that unfortunate incident when your husband lost his life. There has been so much that has been said about the way your husband died. I was very young when I first read about his struggles in Southern Sudan. Did you really believe the reason given that he died because of a mere helicopter accident?

HG: After the many years that your husband spent fighting for your country, do you now feel his efforts were in vain?

RG: Yes. I will say that because not only my husband but there are so many people who have lost their lives for the struggle of the people of Southern Sudan. So it is not only my husband. So if these people (the ones who have lost their lives) would come back and see what we have done, they would cry for their lives. They thought that the price was right when we got our independence which was unanimously endorsed by the UN Security Council and the UN and the whole world.

HG: For some of our readers around the world who do not know who Salva Kiir or Riek Machar are, can you take a few moments to tell us what these two people really are like?

RG: Aah! Really I wouldnâ€™t know much about them but if you asked me about my husband I would be able to explain about Dr John. But at least I will tell you that Salva Kiir is somebody I thought I knew but later I found out that I did not know him very well. Because this is somebody who [we] really started with the struggle, the first war, during the first Anyanya war and he was in that struggle when he was a very young man.

In the second war he was with my husband in the struggle. He is a very quiet person who I thought he knew that struggle of the people of Southern Sudan because he has been in it for a long time. But after he became the leader of the people of Southern Sudan, I didnâ€™t know him anymore who he was because we everything is clear. We have our documents and I donâ€™t see why he could not deliver to our people. So it is something that I do not know how to describe this man very well.

Dr Riek Machar was in the SPLA/SPLM and he finished his PhD in the UK and then came to the struggle. He was one of our commanders at the early times of the SPLA struggle. He was in Unity State. He did very well. He was fighting. But he was really ambitious and in 1999 he staged a coup against Dr John. But you canâ€™t make a coup under a tree. But this is what happened and it brought a very bad mark on him because the people of Southern Sudan felt that he took us back very badly. Our troops were organising to come and capture Juba but when he staged that coup, it took us back ten years because the enemy recaptured all the towns that we had and we had to start from the scratch.

A lot of people died. There was a massacre in Bor. That is why I told you that in this there are bitter bad memories about it. But yes. We are people of South Sudan. Dr Riek reconciled when Dr John was still here. He brought all the people of Southern Sudan together and we won. We won the unity of Southern Sudan and the people of South Sudan became independent. Unity is a strength. So when Dr John died he became vice president of the movement. So these are two people I donâ€™t know very well but this is how I can describe them.

HG: Would the presence of foreign troops in your country help ease the situation?

RG: We already have over 1500 UN troops currently in the country. If the secession of hostilities is signed then there is no need to have foreign troops in our country. But the problem for me could be, first of all, I do not trust our government and I do not trust our president himself because they will turn the secession of hostilities into other things. Thatâ€™s my fear. But otherwise none of us wants foreign troops to come to our country just like that. But we have political leaders who can see how we can quickly bring this [conflict] to an end.

HG: Finally can you confirm reports we have heard that soldiers loyal to Dr Riek Machar are rounding up Ugandan citizens working in your country and bludgeoning them to death?

But what I wanted from President Museveni himself was to make himself as a mediator like what other leaders in the region, Ethiopia, Kenya and Djibouti [are doing]. But he said he had to get in because President Salva called for the troops. But this is a bad government because we did not build our army. If you do not build your army you end up like that.

But before my husband died he showed he loved the people of Uganda. He worked hard for the harmony between the people of Southern Sudan and Uganda. We do not want any problems with Uganda. Even with this, we want to [amicably] solve this problem together so that we do not have any problems with our brothers [in Uganda]. We have brothers and sisters in Kenya, Uganda and Ethiopia. We have tribes along the borders. So we do not want any problems. If we have problems, we want to resolve them as brothers and sisters.

I always want to say the truth. I have not heard any reports that our troops are targeting Ugandans. I have heard about the targeting of the Nuer and the Dinka especially in Malakal but I have not received any reports that Ugandans had been [specifically] targeted. You know that during the struggle, the people of Southern Sudan knew we were being supported by Ugandans. We would not transfer [our] problems to the Ugandan people.

Secondly, even if President Museveni brought his troops to Southern Sudan, it would not amount to South Sudan troops targeting Ugandans in our country. The problem would be with the people who are in uniform. Even those Uganda troops that have been captured, our troops did not kill them.

HG: Madam Garang! We thank you so much for agreeing to this interview. You are a very busy person and we can now let you return to your efforts. Thank you so much.

RG: Thank you very much and Happy New Year.