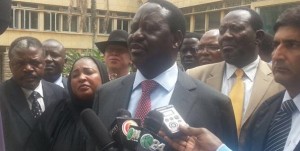 BY CYRUS OMBATI for the Standard Newspaper

The nephew to former minister Raphael Tuju has been arrested over the death of Tony Ogunda.

Cosmas Okoth was arrested after the results of the post mortem exercise were announced on Wednesday evening.

Nairobi County police commander Benson Kibue and his CID counterpart Nicholas Kamwende said they are holding Okoth over investigations into what they termed as murder.

â€œWe are pursuing among other issues murder angle and this boy is a prime suspect in the incident because he was with the deceased,â€ said Kibui.

Kamwende said they will record statements from several other â€œpartiesâ€ that have been mentioned in the case.

â€œThis is an investigation that will bring in all those who have been mentioned. We will follow it up to the end,â€ he said when he was asked if Tuju and his wife Ruth Akinyi will be questioned.

Okoth recorded fresh statements on Wednesday stating the door in question at the house where Ogundaâ€™s body was found was broken in a scuffle amongst their friends who had visited.

George Otieno, a close friend of Ogunda too said the door was broken in a scuffle last Wednesday.

Otieno revealed Ogunda had a premonition about his death and had been talking about it.

â€œHe always said he will leave us and that he will die. We thought he was joking but he said he saw he would die soon,â€ said Otieno.

Otieno said he, Ogunda, Okoth and a group of others had in the past two weeks been on a drinking spree.

â€œCosmas has been buying us alcohol but he did not drink himself and we do not know why. On Sunday we even had a bash in the same house where the body was found,â€ said Otieno.

Ogunda whose body was found in a house along Matumbatu Road died out of head injuries caused by a blunt object.

A post mortem conducted on his body on Wednesday revealed he had internal bleeding to his brain.

â€œHe had trauma to his head which is consistent with a blunt force. The deceased had internal bleeding to the brain,â€ said government pathologist Dr Peter Ndegwa.

Ndegwa who together with his colleague Dr Johansen Oduor conducted the autopsy at the City Mortuary said they had taken various samples from the body for further toxicological tests.

The tests will reveal if Ogunda, 24 and the last born in a family of three boys had any other chemicals in his body that contributed to his death.

The exercise was conducted in the presence of the family lawyer Cliff Ombeta.

The lifeless body of Ogunda was found lying on the sofa set of Okothâ€™s house, which also belongs to Tuju.

Kilimani police boss Bernard Muli said they found a bottle labeled Humalog 1DNA 100 gms with the syringe next to the body.

The medicine is used to treat diabetes but his mother and friends said Ogunda had no such medical condition and the bottle could have been planted there to divert attention.

The former officer had been named in a divorce petition filed by Tuju, who is seeking to legally end his 27-year marriage to Akinyi, with whom the former presidential aspirant has three children.

In the divorce case, Mr Tuju accuses his wife Ruth of cheating with the GSU officer who was attached to his home.

He claims in his petition that his wife entertained Mr Ogunda at his Karen home and has also rented a house for him.

According to police report, Ogunda, had been with Okoth on Monday night on a drinking spree before they went back to the house at about 2 am.

, mOkoth said in his statement they went to the city centre for a while on Monday before walking downtown to Relax Pub along River Road where they had drinks until about 1.30 am.

He added he woke up at about 6.20 am and tried to wake up Ogunda 40 minutes later but there was no response.

He said they have been staying with Ogunda for the last two weeks.

This story was published on the standard media group site, for more related stories follow this link http://www.standardmedia.co.ke/?articleID=2000087485&story_title=tuju-s-nephew-arrested-over-ogunda-s-murder