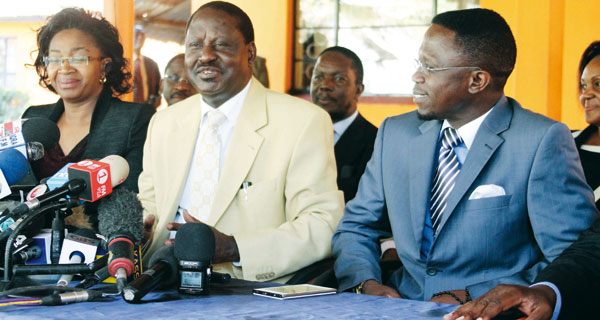 Homa Bay county ODM branch officials have termed calls by Nyanza MPs for Raila to contest the vacant senate seat as SHAMEFUL and ridicule to the Luo community. They said Homabay county has sons and daughters able and willing to take up the challenge and continue the legacy of the late senator Otieno Kajwang’

The officials hinted that two front runners for the seat at the moment were Kajwang’s challenger in the 2013 election Hilary Alila and Raila’s trusted aide Silas Jakakimba. Meanwhile City businessman Fred Rabongo has announced he is also in the race to succeed the late Otieno Kajwang.

The call for Raila to fill the vacant county senatorial seat was kicked off by Nyatike MP Omondi Anyanga who later on Wednesday spoke on behalf of a section of MPs, saying Raila is the only politician who is capable of replacing Kajwang.

â€œWe as the leaders of Homa Bay county want former Prime Minister Raila Odinga to honour Kajwang by contesting for the Homa Bay Senatorial seat,â€ Anyanga said at a press conference in Nairobi on Wednesday.

Raila supporters online castigated the MPs terming them Uhuru Kenyatta moles whose intention was to lower the stature of the peoples’ president to Aden Duale level .

Here is what Jakakimba shared on his oficial Facebook page;

We are already spreading out on The Ground. We wish to notify all that on Wednesday 10th December, this Good Year of The Lord, we will formally launch our bid before various County Stakeholders, at Homa-Bay town.

This event will be graced by Homa-Bay County and Sub-County leaders of the Change Movement (ODM), Women Leaders, Youth Leaders, The Disabled, KNUT Representatives & Council of Elders, Boda Boda Association, among others.