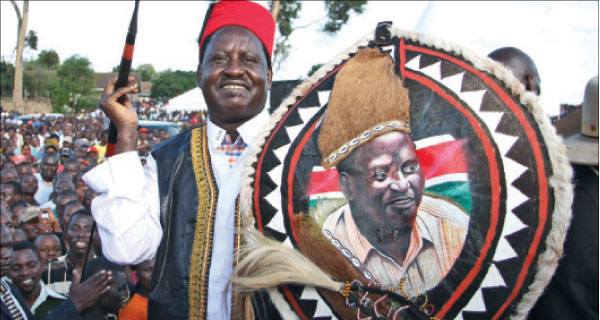 ODM Party leader Raila Odinga has urged his party legislators to concentrate on the Okoa Kenya referendum initiative saying it is more pressing to Kenyans than who becomes what on 2017 elections.

The CORD leader was reacting to calls by a section of ‘rebel’ ODM MPs who have pledged their loyalties to the ruling jubilee coalition (some no longer attend ODM party meetings nor support the party’s position on a host of issues) that he should not stand in 2017 elections.

“It is too early for us to discuss this issue. It is a post-referendum issue. To discuss it today is to divert attention from the real and most urgent issues that Kenyans expect us to deal with,” said Odinga.

Mr. Odinga has not indicated whether he will vie or not, but several legislators – both from Jubilee and CORD – have persistently called on him to hung up his boots.

A local newspaper reported that a group of legislators who did not want to be mentioned want Mr. Odinga to quit politics, claiming the youth no longer ‘identify’ with his struggle for second liberation. (Which is cheap, petty Â and hollow to even imagine).

This current group is headed by Kitutu Chache MP Richard Onyonka. Interestingly, Odinga appointed Hon. Onyonka an assistant minister in the grand coalition government despite the fact that the legislator was then not elected on the Orange ticket, but on a PDP party which was then loosely affiliated to ODM.

Supporters of Odinga have reacted with indignation, wondering why those who benefited personally from the former PM are often the first persons to hit him hard when he is low.

“It is too early for us to discuss this issue. It is a post-referendum issue. To discuss it today is to divert attention from the real and most urgent issues that Kenyans expect us to deal with,” said Odinga.Â

This is the second time the CORD leader is telling his flock to toe the line. During the meeting with MCAs at Bomas of Kenya recently, Mr. Odinga urged those in attendance to avoid 2017 politics, saying elections time will come and there will be campaign politics then.

He also reiterated that Okoa Kenya referendum push is not a contest between him and President Uhuru Kenyatta, or between CORD and Jubilee.