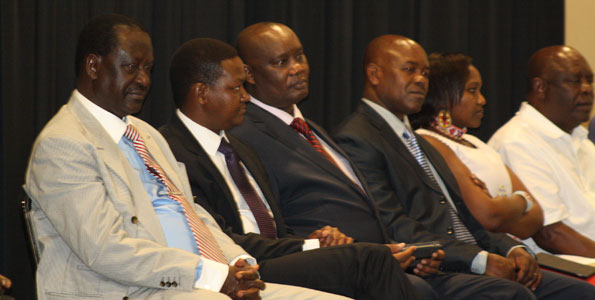 Dallas, Texas USA
Former Prime Minister Raila Odinga has appealed to America’s private sector and government to help Kenya’s devolved units succeed by directing investments to Kenya.
While officially opening the meeting between governors from the Coalition for Reforms and Democracy and investors in Dallas, Texas, Mr. Odinga said America has always stood with Kenya at times of significant transition like the one the country is undergoing today.

Mr. Odinga down played the recent decision by President Barack Obama not to visit Kenya saying it did not mean the ties between Kenya and the US had been downgraded.
“The ties between our two countries are strong as they have always been. Donâ€™t worry so much that President Barrack Obama never stepped in Kenya during his recent tour of Africa. I am sure the President appreciates the depth of the ties that bind our people and our countries,” Mr. Odinga said.

“The truth is; the boundaries between our people and our countries are overwhelmed by our connections. Kenyaâ€™s prosperity will benefit America. Our security certainly contributes to Americaâ€™s. The steady march of our democracy certainly advances human rights, which is a pillar of Americaâ€™s value systems,” he added.

The former PM said that because America has always stood with Kenya at significant moments, it was “therefore not a surprise” that Kenyan governors are in the US as they seek to implement devolution which he described as, the most significant provision of our new constitution.
He called on US investors to support Kenya’s governors by directing investments to various counties saying it would ensure equitable economic growth and create jobs for the youth.

“Governors are at the frontline of our dreams for an equitable society where development opportunities are evenly spread across the country.
They are the most prominent symbols of the new order we are trying to create in Kenya. The Governors are on the ground. They are able to see directly what is working and what is not working, what needs to be retained and what needs to be fixed. Their success will be our success as a country,” the former PM said.

“We are at this forum to learn and to seek opportunities for the benefit of our country. I am here to invite the American business fraternity to join us in the exciting but complex journey of taking power to the people through devolution,” he added.

Mr. Odinga said CORD prioritized expenditure on social programs that it believes will transform the lives of the people, reduce poverty, improve healthcare and create jobs.
He called for investment in infrastructure, healthcare and education.

“A trained and skilled workforce will attract investments and also ensure the youth are able to compete for and get jobs. At the same time, a good network of feeder roads across our counties, coupled with provision of affordable, reliable, clean and efficient energy together with healthcare will change the lives of our people,” Mr. Odinga said.

He said that although education is not entirely under the mandate of county governments, the governors still welcome investments in areas that will promote Early Child Education, create a sound working environment for teachers and proper infrastructure in schools for the pupils.
He called for investment in Agriculture which remains the main source of income for our people.

“We need to set up more research institutions; to produce more quality and diseases and drought resistant seeds. We need to produce fertilizers and to pursue irrigated agriculture. We also need to process our agricultural produce and package them for the global market. I invite you to partner with us in this too,” he said.

Mr. Odinga appealed to the governors to establish linkages and learn from America’s long history with devolution, multipartism and the culture of bipartisanship that has enabled decentralization to work in the US.

“Some of the goals we are pursuing back home require that we join hands with colleagues from other parties in a bipartisan manner. Securing Devolution requires that the governors, the senators and Members of Parliament must work hand in hand,” Mr. Odinga said.