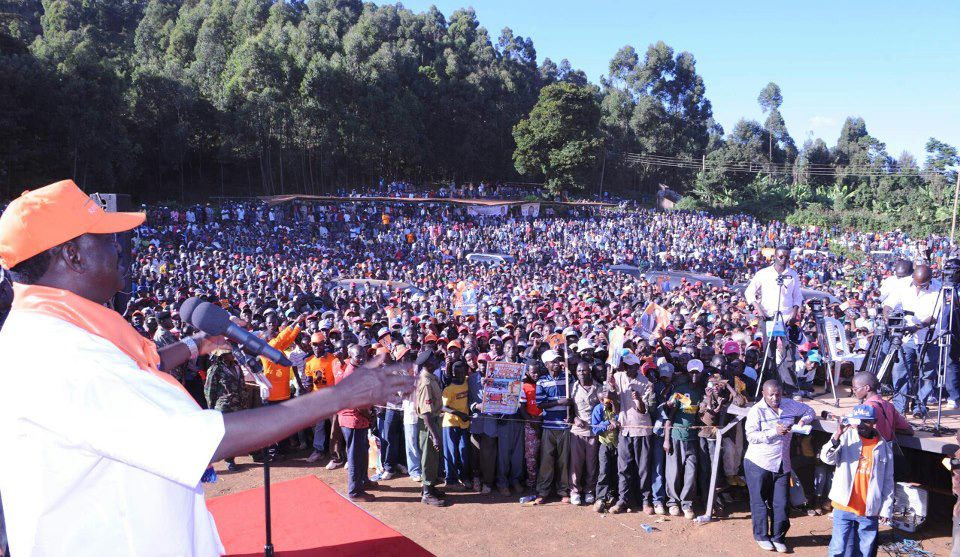 CORD Presidential candidate Raila Odinga on Thursday received a super reception in the larger Meru county. Thousands of the area residents turned up for the CORD rallies and offered to vote for him come March 4th.

Meru County is perceived to be a swing vote region, many pundits are in agreement that Jubilee’s Uhuru Kenyatta has a upper hand as compared to CORD’s Raila Odinga as per past voting trends.

The tens of thousands who attended Raila’s rally pledged to vote for him on March 4th, a few in the crowd donned TNA colours but chanting CORD slogans as leaders addressed them. The move by Jubilee supporters attending and chatting CORD slogans was a nice surprise to the CORD team.

“We can confidently conclude that we received Jubilee supporters, this was a amazing, it re-affirms our campaign strategy for the region” Eric Maina a CORD strategists said.

CORD leader Raila Odinga’s success entry into the region can be attributed to Uhuruâ€™s move to isolate and frustrate Kiraitu Murungiâ€™s APK- Mbus party. Odinga worked with Kiraitu during the struggle for the 2nd liberation (both were in Ford Kenya), they later re united in the NARC coalition government and the current National Accord government.

Hon Kiraitu is said to have a good working relationship with Odinga in the cabinet, there were rumours last year that Kiraitu was headed for a coalition with Odinga. Kiraitu has made it clear that the Ameru people have a democratic right to elect any leader who can take Kenya forward and not necessarily from Mt Kenya.

The Mbus party does not have a presidential candidate instead the party has directed the membership to chose wisely taking into account the welfare of the country.

The ban of Miraa export into the Dutch/European market will play a critical role, Uhuruâ€™s emphasis that Kenya need not trade with Europe injures his ability to fix the miraa market controversy.

The highlight of the tour was when Raila promised to sort out the miraa ban to Netherlands, the crowd went ecstatic with chants of ODM!, Raila promised local miraa farmers his government would engage The Netherlands to lift the ban imposed on the crop.

â€œWe know miraa is an important crop for this region and the country. We will take a direct approach and ensure its market remains intact,â€ said Raila to which the crowds went ecstatic with chants of ODM! ODM! CORD! CORD! TUKO TAYARI!!

The locals seem to have come to the rally with an open mind willing to listen and make an informed choice taking into account local dynamics and national interest. The miraa issue seem to be the game changer in the region.

“We will vote with a clear conscious, we have been supporting Kibaki for the past 20 years and now with his retirement we have an opportunity to look at bigger picture. Kibaki was a great leader but we did not benefit anything special than the rest of Kenya” said Kinyua Mukira a miraa trader.