The Rt Hon Raila Odinga has been invited to a State Dinner hosted in his honor by the US State Department, the dinner will be preceded by a meeting with Deputy Secretary of State William Burns and other top state department officials in Washington DC.

This rare privilege is granted only to individuals that the United States Government deems to be Adventists of real and meaningful democracy in their home countries like Tibetan leader the Dalai Lama and Myanmar/Burma’s Aung SanÂ  Suu Kyi.

The invitation comes as a surprise to many owing to the fact that Raila was on a private visit, the spontaneous engagement with the Obama administration fuels further speculation that the former Prime Minister who has been rigged twice of Kenya’s presidency is destined for major international assignments.

The former Prime Minister of the Republic of Kenya had earlier on Tuesday delivered a keynote address that drew a standing ovation at a star studded- policy thinkers, well attended Woodrow Wilson Center, Washington DC on African Democracy.

Mr. Odinga has in the recent past been the focus of attention in local and international circles with numerous leaders seeking to draw from his wealth of experience in developing the Kenyan democratic narrative.

He has continued to be a leading authority on the direction in which Africa as a continent should move into a continent that is economically empowered, democratically transformed and politically reformed.

International political experts observe that had he been declared winner in 2013, Raila would have helped Africa reclaim its delayed transformation into an economic powerhouse in the world, a feat that Asian Countries are fast attaining.

Going by the difficulty in which his contemporaries in Liberia and Ivory Coast faced odds in being declared winners, Railaâ€™s liberal, progressiveÂ  and independent mind, far removed from the retrogressive ways of most African despots some of them genocide suspects, is not a bird of a feather among his â€œwould have been counterpartsâ€ in the AU.

His invitation to a dinner hosted by the State Department whose budget would be in the range of hundreds of millions of shillings is testament to the fact that Raila is still viewed with high regard and great respect internationally.

Mr Odinga alsoÂ  took part in a roundtable discussion on Tuesday that was organised by a group of US corporate executives with investment interests in Africa, of interest to Kenyans is his ability to lobby for direct funding and investment opportunities to county governments.

It opens up our eyes to something we donâ€™t know, that a country with the intelligence capacity to know for certain who truly won the 2007 and 2013 could treat a former Premier with such high regard, is another proof, that 2013 election was another sham. Itâ€™s another clue that the USA probably knows who the winner of 2013 election was- mostly likely not the one declared winner.

Washington Insiders intimate that Raila is the only man that is ideologically sane and sound to transform the thinking in the otherwise â€œdark continentâ€. They hope that his foresight will check Africaâ€™s decline further into an abyss of mediocrity and political immaturity as was evidently manifest during AUâ€™s Jubilee celebrations.

Raila Odinga had travelled to the US on a personal trip to attend his youngest daughter Winnie’s graduation from Drexel University, and has since met Kenyans living in America as well as the Mayor of Philadelphia, Michael Nutter and longtime America’s topÂ  diplomat, Johnnie Carson among other dignitaries.

Meanwhile Washington DC residents are having to contend with huge traffic snarl-ups to pave way for Raila Odinga’s State Visit. This man is larger than life, so they think! 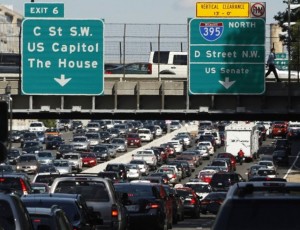