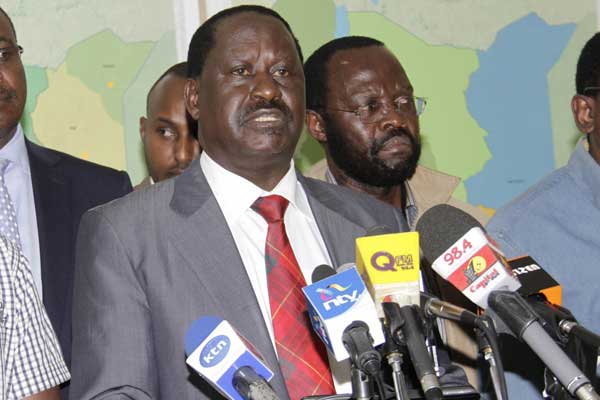 Cord leader Raila Odinga has said that he will not vie for the Homa Bay county Senate seat.

“Please allow me to disappoint the Homa Bay elders, for I want to concentrate on the task of revamping the Orange Democratic movement,” he said at a press conference on Monday.

Raila said he also wants to keep the government “in check” ahead of the 2017 general elections.

“Please allow me concentrate on creating a party machine and a Cord coalition partnership, that can keep the government in check, advocate and promote the provision of services to the Kenyan people and that can eventually take over power in two yearsâ€™ time,” he said.

“The task of sustaining the momentum of change in the party and guiding the new leadership requires the full attention of the party leader and the entire team,” he continued.

Raila said the decision to decline the proposition by a section of Homa Bay leaders followed wide consultation.

”I was not in anyway influenced by things on social media. I am a politician guided by the mood on the ground,” he said.

He however thanked his party and the other leaders for having confidence in him.

He also asked the party Executive to identify a suitable candidate to vie for the seat in the 2015 election.

“We need a process that is inclusive, peaceful and respectful of the ideals and stature of the late Kajwang, in line with constitution of our party,” he said.

Raila acknowledged that finding the right person to replace Kajwang is challenging.

“There has been a massive soul searching, anger and anguish since Honarable Kajwangâ€™ left. That could explain the reactions and the various attempts to fill the slot.

“There is an African proverb that saysâ€¦ The mighty tree falls and the little birds scatter in the bushâ€¦ Kajwangâ€™s death left our party faithfully scattered,” he said.

Others expected to vie for it include former Rangwe MPs Shem Ochuodho and Philip Okundi.

Some of the contestants, including Kajwang and Rabongo, have already launched their campaigns while others are expected to begin this week.