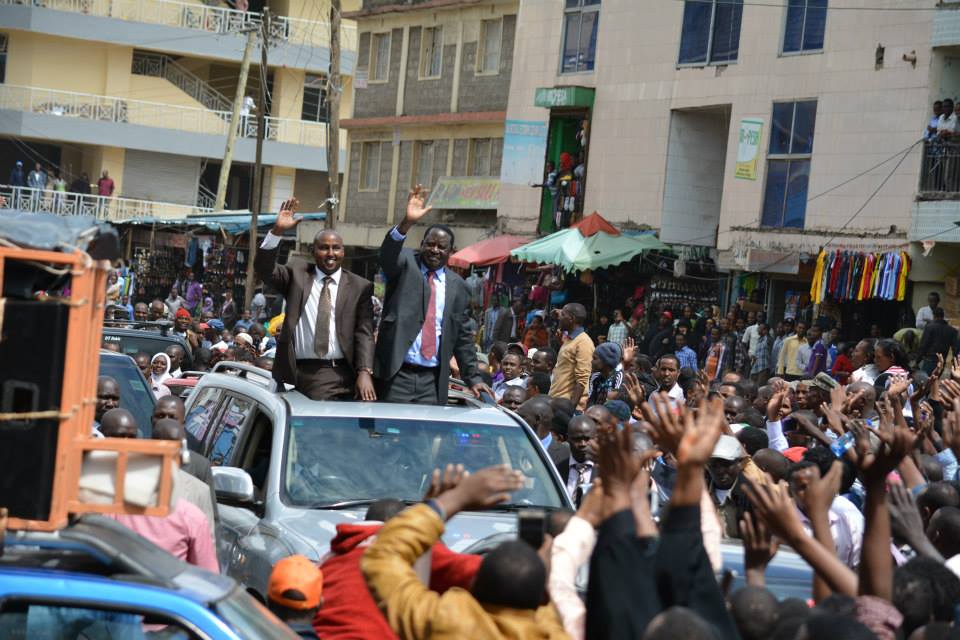 The Peoples’ leader Prime Minister Raila Odinga made an emotional tour of Eastleigh shopping centre-ground zero of discrimination against the Somali community by the Kenyan government.

Raila’s tour puts Uhuru to shame who NOT has visited the area even after acquiring Ksh 55 million armoured vehicle from Europe instead choosing to enjoy the safety and ambience of State House.

The area traders narrated the painful experiences they have gone through since Uhuru ordered a crack down on illegal immigrants in the area that led to ethnic profiling. The residents majority of whom are traders narrated to PM Odinga how the governmentâ€™s attempts to weed out the Al Shabaab has been reduced to an operation to close down their businesses and usher in members of a particular community finding favour with the current government.

On his part Raila warned Uhuru against disregarding the cries of ordinary mwananchi and urged him to convene the national dialogue with all stakeholders to chat the way forward for our country since his government has demonstrated the highest incompetency ever in the history of the republic.

Raila who arrived in the country on Saturday said the country is in crisis on various fronts, including insecurity and corruption. Raila said these matters could not be sorted out by the Jubilee coalition alone.

He added â€œIf the President rejects our offer for talks, Kenyans will conduct their own talks during â€œSaba Saba Dayâ€ (July 7) and make a decision there on how to move forward.â€

Prime Minister Odinga once again affirmed that he wants nothing short of substantive discussions and tight agreements on key national issues including tackling what he termed as runaway insecurity, corruption, threats to Devolution and the disbandment of the Independent Electoral and Boundaries Commission. â€œThe talks we are demanding are not about inviting us to State House for a cup of tea with the President. We donâ€™t lack cups of tea where we are now. No, that would be an insult. We want serious discussions on how the country can move forward.â€

Here is how Uhuru’s K24 TV covered the event

One by one, the residents took to the podium, pouring their anger, frustrations and outrage. They told the former PM in very graphic details the operation that has been sanitised by Kenyaâ€™s media, laying bare its ugly side and requesting the former PM to intervene.