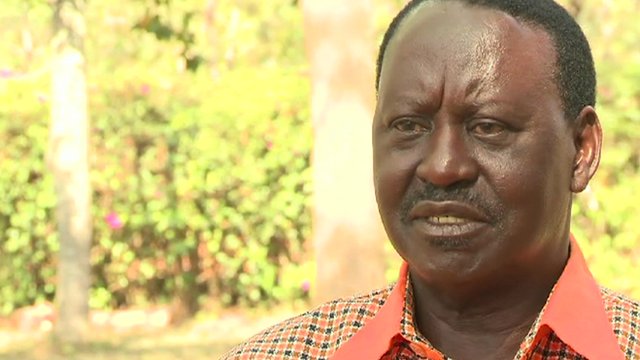 Thank you for heeding my call on short notice and attending this meeting, at this critical moment in the history of our country.
I also wish to congratulate each of you for the hard fought battle and hard won victory.

The victory by each of you has taken our party closer to having the numbers that will enable us implement our dreams for Kenya.
I also want to thank each one of you, whether you won or lost, for standing with our party.

Some of you stood with CORD against great odds and in the midst of obvious options that would have seen you ride easily to victory.
But you chose principle and ideology over expediency, euphoria and tribe. You chose what is right and not what was easy in this election. For this, I honour you and I congratulate you.
But you chose principle over convenience and comfort and ran on CORD ticket. I congratulate all of you.

In running on CORD, you have taken our struggle for change and reform forward. But a lot remains to be done.
As I said on many occasions before election, our opponents believe that reforms and change are already here and we need not fight for them anymore.

To us in CORD, this election is just the beginning of the push by the people of Kenya to realize the fruits of their labour as far as change, reforms and democracy are concerned.

I want to remind you of the words of the late US President Ronald Reagan Remind Kenyans of the words of Ronald Reagan and I quoteâ€¦
“Freedom is never more than one generation away from extinction. It must be fought for, protected and handed on to the next generation for them to do the same or we will one day spend our sunset years telling our grand children what it was once like in a country where men and women were free but no longer are.”
We are here to defend democracy and secure it for posterity.
That is why we will shortly be moving to court; to secure the gains we have made so far and to get more.The Supreme Court that we are moving into is itself a product of a long and painful struggle that caused people their careers and their lives.

It is now a reality, and should be part of our motivation to defend what we have. Change and democracy are worth fighting for.
That is part of why we have convened here. I invite you to join our struggle to safeguard democracy for our children and their children.

We seek nothing other than safeguarding the gains made and ensuring that we hand over a better nation to our children.
In invite you to embrace the ideals of DUTY to the nation, SACRIFICE for the nation, COMMITMENT to the nation and PATRIOTISM to our nation.

These are the ideals that have sustained this nation and they are the same ideals that will carry us forward.

I want to appeal to the all Kenyans of good will, including those who ran in this election as presidential candidates, to support CORD in its quest for justice and truth through the courts of law.
Justice serves everyone in the end.

I want to remind all Kenyans of this famous classic poem which runsâ€¦
â€œFirst they came for the Jews and I did not speak out because I was not a Jew.

Then they came for the Communists and I did not speak out because I was not a Communist.

Then they came for me and there was no one left to speak out for me.â€

Today, the victim may be CORD. Tomorrow, it will be somebody else.

Let us join hands in seeking justice and fairness at the polls.
Let us join hands in ensuring that elections count. That they are not exercises that are conducted to confirm preconceived conditions and positions.
Let us join hands in rejecting the notion that a little electoral theft here and there every five years constitutes some kind of magical progression towards greater democracy and change.
Above all, let us ensure peace and stability prevails in our country as we pursue justice in the courts.
I thank you.