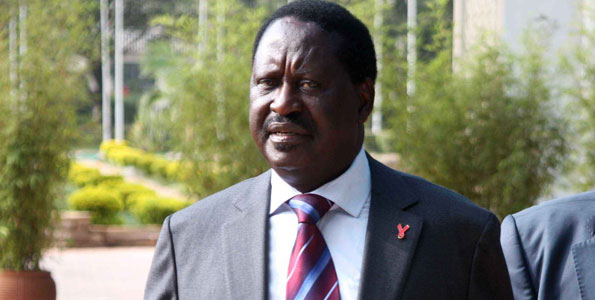 Former Prime Minister Raila Odinga was received in South Africa with the full honours of a VIP, but as he departed Kenyaâ€™s Jomo Kenyatta International Airport on Tuesday evening, Raila was treated as a common â€˜raiaâ€™.

An aide to the former Premier told Capital FM News that Odinga was taken through a full security check, in queue with other passengers to South Africa where he even had to remove his belt and shoes as part of security screening.
Philip Etale explained that Odinga endured the security check at the international departures unit after being denied access to the Government VIP Lounge that is reserved for ambassadors and government VIPs.

â€œThe former PM was forced to go through the other entrance reserved for international departures and he had to remove his belt just like any other passenger,â€ he said.

â€œAnd even though he didnâ€™t want to be seen like he was just crying out I believe that as the second and possibly last Prime Minister of this country, he deserves better than that.â€

Etale added that protocol officers at the airport denied Odinga access to the VIP lounge forcing him to momentarily leave the airport and wait for his flight at a hotel on Mombasa road.

He explained that the former premier had just come back from Kisumu and was scheduled to travel to South Africa in an hourâ€™s time.

â€œSince he had a flight an hour later and there being no room for him to wait for that connection flight at the VIP lounge, he had to go to Eka hotel. And he waited there until it was time,â€ he said.

He further disputed assertions by the Kenya Airports Authority (KAA) that Odinga had access to the VIP Lounge maintaining that it was a PR gimmick.

He added that KAA and Government Spokesman Muthui Kariuki were misleading Kenyans because Odinga did not want his convoy to access the airside.

â€œThat is a lie because Raila has never wanted to use the presidential pavilion because he knows it is reserved for the president. His convoy has never been to the airside. Our drivers always wait outside the VIP lounge,â€ Etale argued.

Kariuki had on Tuesday sent a terse statement to newsrooms accusing Odinga of dragging the Secretary to the Cabinet Francis Kimemia into the matter to â€˜whip up public sympathyâ€™.

â€œIf dragging Mr Kimemiaâ€™s name into this sordid business is meant to whip up public sympathy then it has failed miserably,â€ he said.

â€œSuffice to say that even retired presidents Moi and Kibaki no longer drive in their convoys to the airside, they walk â€“ Period,â€ he stressed.

Odinga left Kenya for Johannesburg where he will attend the African Presidential Roundtable 2013 discussing the cost of democracy in Africa.