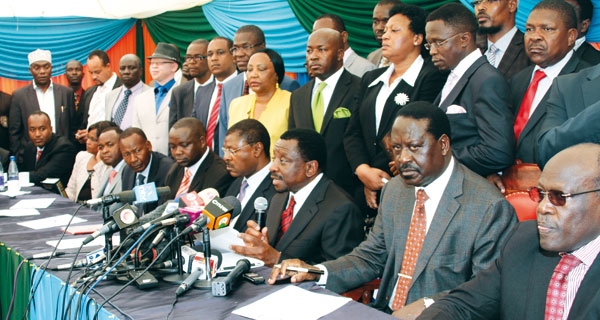 Prior to the president’s action on Lamu, land reform in Kenya was treated as an initiative of popular revolution.

During the campaigns in 2013, Cord, said land reform was a campaign issue and was going to be a problem for the next administration.

Jubilee responded that it was emotive, divisive and should not be an issue.

Yesterday, President Kenyatta acknowledged land is an issue but appeared to blame the predecessor.

Cord wishes to state that blaming the predecessor is not what people are looking for in their president. It is not going resonate for long, if it does at all.

Kenyans are looking for somebody whoâ€™s not blaming somebody but is going to solve their problems. Now, it’s the President, who comes from a family that is a major land owner and publicly accused of acquiring most of it illegally, that has started canceling titles of allegedly illegally acquired land.

Land reform is therefore no longer about land revolution. It is now a matter of justice, recognized and endorsed by the highest Executive authority.

This must go full cycle.

There exists the Ndungâ€™u report and the TJRC report that have both laid out extensive audits of illegally acquired land and how they are causing tension and wars across the country. Both reports have called for cancellation of titles.

The presidentâ€™s move is perfectly in line with what both Commissions and the general Kenyan public expect as the way to implement the recommendations of both.

What reason would the president give not to issue similar orders in respect of all land acquired illegally?

The CORD leadership demands that the president becomes consistent and adopts the same approach to the Ndungâ€™u and TJRC reports.

As Opposition, we are pleased that overall, the Referendum call is bearing fruit even before it begins. The Government has now accepted that land is at the centre of the chaos in Lamu and the Coast in General as we said before and after the elections.

We feel energized that if the fear of a Referendum can bear so much fruit, the actual Referendum will deliver much more? Kenyans can look forward to good times ahead.

In the meantime, we ask that a President who has acted â€œwithout fearâ€ in canceling titles must now act â€œwithout favourâ€. The Ndungâ€™u report and the TJRC report must be implemented in the same way, swiftly and without fear or favour.