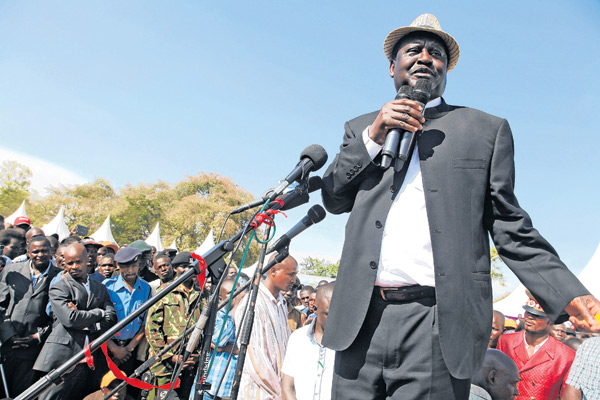 Cord leaders have dared the Jubilee government to arrest Senator James Orengo over the allocation of land in Lamu to 22 companies saying they had evidence on the cartels behind illegal land transactions in the country.

The leaders turned the heat on President Uhuru Kenyatta over his decision to revoke land titles in Lamu, and declared that the Jubilee coalition was not honest in its efforts. The politicians asked the Head of State to implement the original report of the Truth, Justice and Reconciliation Commission (TJRC) for a long-term solution.

The Opposition leaders also viewed the move to revoke the Lamu titles and target Mr Orengo, a former Lands minister, as political and said they would spill the beans if they were provoked further.
Speaking at the burial of former Planning minister Adhu Awiti at his home in Karachuonyo, Cord leader Raila Odinga said Mr Orengo had voiced concerns over rampant land grabbing in Lamu County when he was minister. He said Cord would publish the names of the â€œtrue land grabbers of Lamuâ€.

The funeral of the former minister, who was also Mr Odingaâ€™s advisor, was attended by a battery of MPs from the region hosted by Homabay Governor Cyprian Awiti and Rachuonyo MP James Rege.

The leaders said Thursdayâ€™s revocation of titles for 500,000 acres in Lamu was done outside the law, stating that the only authority mandated with the function is the National Land Commission.
Lands Cabinet Secretary Charity Ngilu on Friday said that Mr Orengo was under investigation over irregular land transactions in the volatile Lamu County during his time at Ardhi House.

Mr Odinga asked Mr Kenyatta to table the original TJRC report which had the signatures of the nine commissioners.

â€œWhat we have in the name of a report on land is doctored; it lacks three signatures of members of the commission. We want the original report that was a result of investigations of land grabbed implemented,â€ he said.

Mr Orengo said he was not afraid of being arrested since Kenyans know the person who was mandated to issue title deeds under the old Constitution.

â€œIf someone has issues with me, we can meet head-on,â€ he said.

PROMINENT FAMILY’S LAND
Deputy Minority Leader Jakoyo Midiwo said 20 per cent of land in the former Coast Province was owned by a prominent family â€œand that they should not pretend to be fighting land grabbersâ€.

â€œThese parcels were issued before Orengo became Lands minister; the illegal allocations are beyond the 22 companies and we want the Lands commission to investigate fraud in the whole country,â€ he said.

Mr Odinga told Jubilee leaders to stop misleading Kenyans and instead concentrate on coming up with a strategy to counter the Oppositionâ€™s push for a referendum.

He said refusal by Jubilee to listen to them at the height of calls for national dialogue was the ruling coalitionâ€™s greatest undoing adding that more pressure is yet to come from the Opposition.

â€œWe gave them ample time and they refused to listen to us; what is making them tremble now? They wanted it the way of Kenyans and we will give it to them at the referendum,â€ said Mr Odinga.
The Cord leader dismissed MPs against the push for reforms saying their schemes were well known to the Opposition.

Mr Odinga said the Cord coalition is still analysing questions that will be given to Kenyans at the referendum and warned that no amount of propaganda will derail their cause.

â€œThey recently misled Kenyans into believing that they had allocated 43 per cent of the national funds to counties. That was a blatant lie and was not reflecting on the governorsâ€™ wishes,â€ Mr Odinga said.

He added that the formula for the Cord push would give counties more than Sh800 billion for funding devolved functions.

Mr Odinga accused cohorts within Jubilee of withholding the funds so that they could benefit from government procurement processes that are shrouded in corruption.

â€œWe know of an ongoing theft in procurement of security equipment and we will not rest until the money that is being stolen through procurement deals is brought down to the people,â€ he said.
He said the Constitution had made it clear that all land issues must be addressed by the National Land Commission and not the Executive.

â€œThe commission has powers to interrogate every title deed issued wrongly; we are prepared to work with it on any information they may want from me,â€ said Mr Orengo.

He said the President was settling scores through the 22 companies recently listed because the people of Lamu voted for Mr Odinga overwhelmingly.

Mr Orengo said he will give evidence of all illegal allocations even if he is arrested.

â€œWe will still push for the referendum as it is the only way that Kenyans will sort out this rogue government,â€ said Mr Orengo.

Homabay Senator Otieno Kajwangâ€™ told Jubilee to direct their missiles at former president Mwai Kibaki other than look for scapegoats in Cord.

â€œLet them arrest Kibaki. Mr Kenyatta must also know that he has no moral authority to issue or revoke title deeds,â€ said Mr Kajwangâ€™.

Mr Midiwo said Jubilee must prepare for the battle ahead that will not end until citizens are freed from oppression.

â€œThe journey to freedom is not over, but I am happy that through the referendum, we are almost there,â€ said Mr Midiwo.