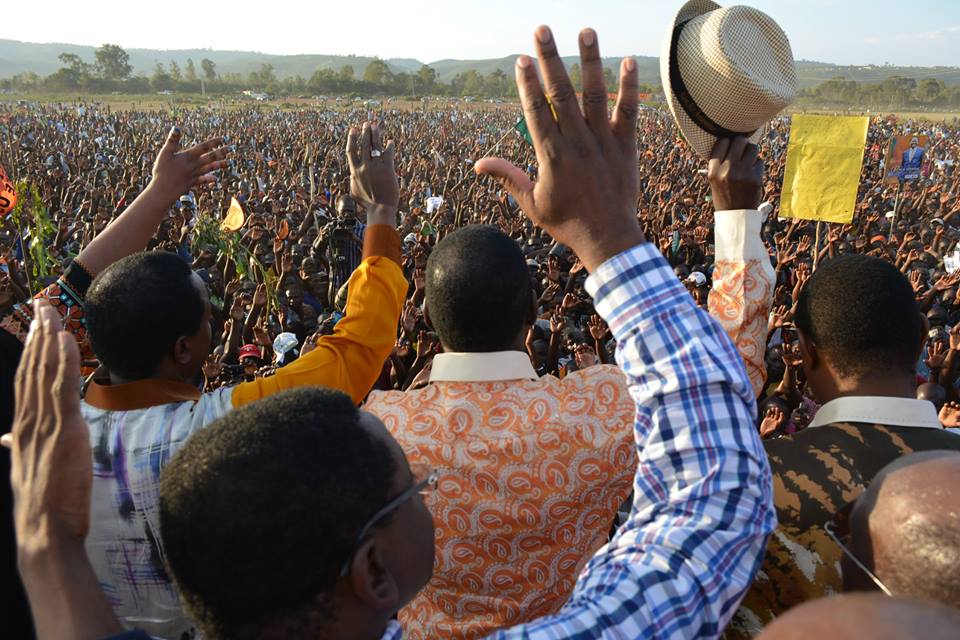 The Coalition for Reforms and Democracy ( CORD) has declared that the Monday Saba Saba rally would be a defining moment in the politics of the country. Coalition principals former Prime Minister Raila Odinga, former Vice President Kalonzo Musyoka and Bungoma Senator Moses Wetangâ€™ula said at a rally in Kisumu Saturday that they would use constitutional means to spearhead change in the country.

â€œThe supreme power is vested in the people of Kenya which they can exercise directly or indirectly to put whoever they want in power,â€ Raila said. He said the country was faced with serious challenges which must be addressed collectively and promised that the Saba Saba rally would be

peaceful, and urged CORD supporters and Kenyans not to panic. â€œOur previous rallies have been peaceful and we do not have any intention to cause chaos on Monday,â€ he stated.

The former Prime Minister maintained that the rally would be a consultative forum to engage the public on the countryâ€™s governance, contrary to the heated political meetings they have been holding across the country. â€œWe will have representatives from various sectors in the country who will present the challenges they are facing and propose the means to resolve them,â€ he said. At the same time, Raila said they do not need security at Uhuru Park because no bad incident has been reported in their previous rallies.

The Government has indicated that it would deploy 15,000 police officers to beef up security at the rally. Musyoka warned the Government against causing chaos on Saba Saba day and then blame it on CORD, saying such a scheme will backfire.
â€œUhuru Park will be under international watch. Any harm caused by the Government will destroy it completely,â€ Mr Musyoka said.
He termed as an act of witchcraft the Fridayâ€™s rituals performed by some religious leaders at Uhuru Park, saying it was a big shame to the country.
â€œThey should cleanse themselves, or whatever bad they wish to happen during the rally will backfire on them,â€ said Musyoka.

The coalition principals said the courts were being used by the State to intimidate them by warning that the trio would be held responsible in the event of any violence at Mondayâ€™s rally.

Wetangâ€™ula faulted the court over the ruling that the three would be held liable should there be chaos at the rally. He added that it was the responsibility of the national government to provide security. â€œThe Inspector General is paid to provide security for all Kenyans, therefore he should not have excuses,â€ said Wetang’ula. â€œThe country has weighty matters which cannot be left in the hands of Jubilee leaders alone.â€

Rampant corruption
The CORD principals said President Uhuru Kenyatta had no option but to agree to engage the Opposition in dialogue to discuss key issues affecting the nation such as negative ethnicity, rampant corruption, the high cost of living and insecurity. Raila urged the public to walk in protest to Uhuru Park carrying white handkerchiefs to express their dissatisfaction with the Government.

Gem MP Jakoyo Midiwo said CORD had many options to exploit if the Jubilee Government does not yield to their demands. â€œWe will use other lawful means because a people united will never be defeated. The time for real change is now,â€ he stated. â€œTutakuwa na Saba Saba, Nane Nane na Tisa Tisa (The push will continue) until they allow dialogue.â€

Coalition supporters started trickling into the rally venue on foot as others arrived on boda boda as early as 8 pm. At 1 pm, elected leaders including governors, MPs, and MCAs arrived at the venue to a warm reception from the public. And shortly after 3 pm, the three CORD principals arrived in two helicopters. They were driven directly to the dais. Speaker after speaker insisted that they would not relent until their agenda of relieving Kenyans from suffering was achieved.

Raila charged the crowd with his popular song nipigwe teke, sitarudi nyuma (Even if I am kicked down, I will not retreat). The leaders had a difficult time controlling the crowd which chanted anti-Jubilee slogans in the rally that was held amid heavy security presence.