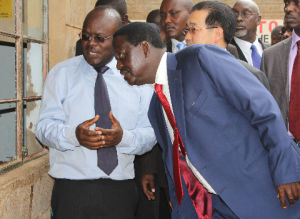 The sensational news that Raila Odingaâ€™s personal assistant in charge of Kibera constituency was behind the Kshs. 8.6 million theft has been dismissed as another shoddy job by the Kenya police. A reliable source confined to this reporter that Edward Onyango is being used as sacrificial lamb to cover for the real culprits.

It is widely acknowledged that the theft may have been an inside job but not the work of Onyangoâ€™s hands! Our source also revealed that the Odingas’ do not trust the police report, two of Raila’s children have paid him visit at the police remand and expressed solidarity with him.

â€œEdward Onyango managed the Kibera CDF fund on behalf of Raila from 2008 to 2012, the use of the funds was audited and given a clean bill of health with all the millions accounted for to the last penny. If Ketta had sticky fingers then the five years he spent at the helm of Kibera CDF was a perfect time, Ithink if indeed this was an inside job then other much more close aides to Raila may be responsibleâ€ an angry Kibera opinion leader familiar with the goings on at Raila Odinga Centre (ROC) said.

The police were informed that it is only Prime Minister Odinga and one other powerful personal assistant a Mr Opondo who had the combination codes to the safe and that should be telling! And who made the report to the police? Oh yeah, your guess is right!

Are there internal power struggles among Prime Minsiter Odingaâ€™s handlers?

Another obvious lead that the police have ignored is the source of the cash, it is alleged that the cash was part of the â€œleft oversâ€ from the campaign kitty and it is highly probable that some donors who funded ODM for a possible runoff may demand a report on how the funds were spent given the fact that there was no runoff. If the money was misappropriated then burglary is a good alibi to the donor for a happy ending!

The question is, were any of ODM sponsors demanding an audited report of the campaign kitty or refund/re-allocation of runoff funds to charitable projects?

Another important question is; was the money really there in the first place? It is possible that the cash was stolen in batches- just like a slow puncture; somebody close to PM may have been using the safe box for his personal use.

“Edward Onyango has worked his way to the top, he may not have political god fathers but he is a good man, I hope he is not being persecuted because he has no godfather or come from a political dynastyâ€ another Kibera youth said

â€œEdward Onyango was our MP for the past 5 years, he led the CDF team with great insights and initiated many flagship projects, to say that he can steal from baba is unimaginable, let the police give us another name please, hii ni siasa kaliâ€. Another youth from Kibera said.

Onyango who was charged at Kibera law courts pleaded NOT not guilty to the robbery charges, and was remanded for three days, the prosecution asked the judge to remand him to facilitate investigations, hope the truth shall be known in three days.

Onyango a USA trained political and communications professional, returned to Kenya in 2006 to help Raila Odinga build a strong youth campaign machine. He joined other leading luminaries like Joshua Angelei, Ken Obura -now MP Kisumu rural, Silas Jakakimba, Ahmed Papa, Jeff Nyamboga, Lilian Mangâ€™eni, Dorothy Mashipei, Mwange Kiganda, Richard Nyabuto among others in campaigning alongside the ODM pentagon in the 2007 elections. He was appointed PA to Prime Minister Odinga in charge of Kibera constituency in 2008- effectively playing role of MP as Raila was busy dragging Kibaki out of tribal cocoon to attend to national matters.