Prime Minister Raila Odinga handing over a copy of his memoir to Southern Sudan President Salva Kiir in statehouse Juba.

Prime Minister Raila Odinga’s book, The Flame of Freedom continued to generate Â international accolades when South Sudan President recieved his copy! Â Salva Kiir’s move is part of a wider interest among African leaders to share in the history, legacy and struggle of one of the most popular African leaders in the 21st century – Raila Amolo Odinga.

Odinga is set for a USA tour later this week. Â During the tour, Â the PM will promote his book and also deliver keynote speech to various groups in the diaspora who have always enriched the Odinga’s growing global prominence.

A source close to the Prime Minister has revealed that the book is being sought after by some of the greatest world leaders from Asia Pacific to Australia, with the socialist Russia and the capitalist USA showing immense interest in stocking the copies. Top European Universities have also placed orders, dwarfing Kenya’s higher education institutions still living in fear of political incorrectness.

The book was launched on Sunday by former Nigerian PresidentÂ  Olusegun Obasanjo among other local and international dignitaries.

Locally it is rumoured that Uhuru got a copy for himself, and also for several of his surrogates with the aim of doing a similar book in the Â near future. Not to be left behind and in the spirit of solidarity, another Â copy is said to have been sent through Kenya Airways Cargo services to the Hague based Deputy President, His Excellency William Ruto the GREAT. Sadly, the man who likes to cry is currently being roasted by PNU coached witnesses, though not very.

Prime Minister Odinga led aÂ  UN and AU mediation role in Ivory Coast among other assignments. He is a leading member of the prestigious Davos (Switzerland) based World Economic Forum and also plays signIficant role in UN Climate Change.

Whenever Odinga is in most western Capitals, he is treated as a head of government long after the controversial March 4th election and the subsequent bizarre Supreme Court Ruling. 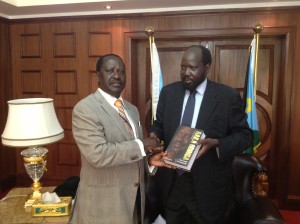