Orange Democratic Movement (ODM) leader Raila Odinga’s son Raila Odinga Junior was on Wednesday September 16, 2020 forced to apologise over a controversial tweet in which he had hit at some of the Orange party leaders.

His apology that was followed with a clarification of his tweet came just hours after ODM chairman John Mbadi appeared in a heated interview on Citizen TV on Tuesday night.

Raila Junior, the former Prime Minister’s third born child had launched a scathing attack on his father’s party and its officials, accusing them of losing focus.

“We as ODM need to find our way back to basics. We are not just about private jets and slay queens whilst abusing rival politicians,” reads part of the tweet.

ODM, he said, has a development agenda clearly outlined in its manifesto. He also urged leaders to focus on service delivery, democratic space and protecting private citizen rights.

We as ODM need to find our way back to basics, we’re not just about private jets & slay queens whilst abusing rival politicians, we have a development agenda clearly outlined in our manifesto, let’s focus on service delivery, democratic space, protecting private citizen rights,,

While hitting back at Raila Junior, Mbadi in an interview with Waihiga Mwaura claimed that Raila Junior is not an ODM member nor does he hold any position in the party.

On Wednesday morning, Kenyans were surprised to wake up to Raila Junior’s tweet apologising.

He said that as an ordinary member of the Orange party, his views are his won and not that of the party. He went ahead to note that his views were not targeting any leaders and apologised for any misunderstanding he might have caused.

“CLARIFICATION as an ordinary ODM member my views are my own and not that of PARTY, 2. I’m grateful to ODM for allowing democratic space in which different views and opinions are expressed, 3 My views were not targeting any leaders & I apologize for any misunderstanding caused,” he tweeted. 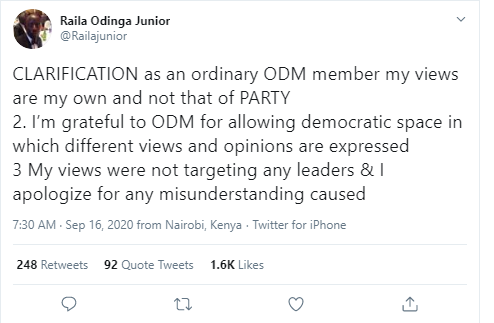 His tweet stirred mixed reactions with a section of Kenyans on Twitter arguing that he needed not to apologise since he had said the truth.

Here are some of the reactions.

You are apologizing for saying the plain TRUTH! & claiming ODM is democratic! Raila Junior, what an IRONY!