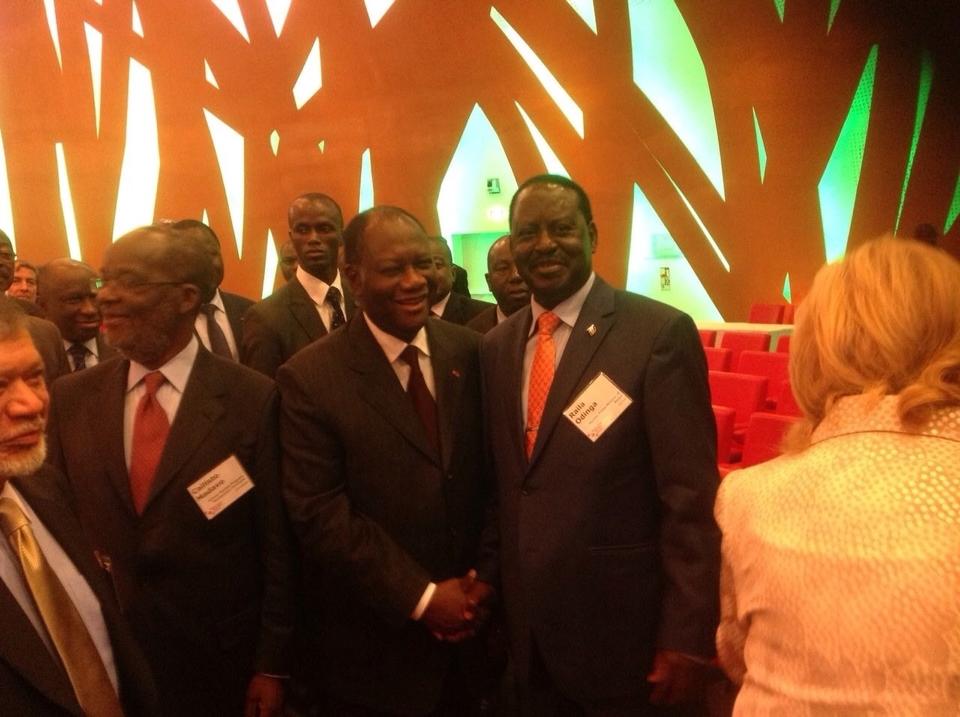 Raila Odinga who is the de facto â€œFather of Modern Democracy henceforth FMDâ€ in Kenya was yesterday hosted by President Allasane Ouatarra of Cote dâ€™Ivoire on the sidelines of the ongoing 2013 Africa Emerging Markets Forum after a week of duty-both personal and political-in the United States of America.

While at the West Africa nation, he helped negotiate out of a protracted political turmoil when former incumbent president Laurent Gbagbo refused to cede power in 2010 after being floored in elections like his East African look alike, the bald-headed Mwai Kibaki, had done earlier in 2007; Odinga revealed he has major plans to form his Pan Africa Foundation; a path many of his supporters had opted for, instead of going back to parliament to listen to a lot of trash and gibberish from Aden Duale, or sit through boring parliamentary proceedings by another boring partisan Jubilee Speaker as the clock ticks towards a possible comeback in 2017.

When Gbagbo refused to cede power, four months of fighting followed, ravaging the worldâ€™s largest cocoa producer and leaving some 3,000 people dead, according to the United Nations, many of them perceived supporters of election winner and current Ivorian President Alassane Ouattara.

Just for your enlightenment, Laurent Gbagbo is now a jailbird at the International Criminal Court (ICC) where ruthless African despots and other world political skunks face justice.

Before he was captured in mid-April 2011 when Ouattaraâ€™s forces, with French and UN backing, overran his heavily fortified compound and literally dragged him from the master bedroom wearing a vest by soldiers who slapped him severally and instantaneously, Gbagbo used to belch a lot of political profanities but the laws of Ivory Coast and the will of the people made him cry like a chicken, or William Ruto, as citizen power caught up with him; something I hope will happen here at home very soon.

To date, moles from the ICC say Gbagbo regrets not listening to Odinga; and curses top honchos of Kenyaâ€™s then PNU Party(latter day TNA) who had fooled him that heâ€™d â€˜rather die than resignâ€™.

Back to FMD Odinga, where FMD (Father of Modern Democracy) is the acceptable title conferred by the people, to be used by the people, whenever occasion allows to â€˜addressâ€™ Raila Odinga, especially after March 4. During the event, Odinga enumerated that â€˜theyâ€™ are exploring means and ways of improving bilateral trade among African countries.
Whether the â€˜theyâ€™ in his sentence included Koffi Annan, Cyril Ramaphosa, Thabo Mbeki and other African eminences, I do not know, but I can safely imagine. However, we know which characters our dear father would not have had in mind!

FMD is expected back in the country on Sunday at 6.00pm.