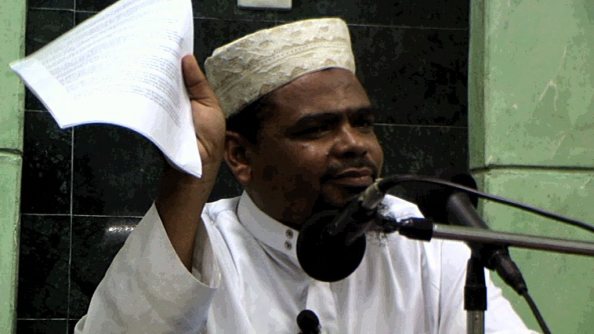 The van he was driving had a minimum of three other passengers at the time including his wife and father in law. As per accounts by his wife Haniya Said Saval, they had been trailed by another car for a while, they were later overtaken by the car and in a moment more than 15 bullets were sprayed on Sheik Rogo. He died on the spot.

The suspect was facing charges of illegal possession of weapons and police had previously accused him of plotting to attack a Catholic church, the Likoni Ferry and the Nyali Bridge

The motive of the gunmen could not be immediately established, police are investigating the attack which his supporters suspect to be extra judicial killing.

The clericâ€™s shooting is generating tension in Mombasa, with Muslim activists contemplating to call for demonstrations in the streets of the coastal town this afternoon.

Security is already beefed up in Mombasa; Rogoâ€™s death is the latest in a string of mysterious killings of Muslim scholars and clerics in the recent past.

Sheikh Rogo was arrested in 2002 after claims that he participated in Kikambala paradise bombings in which fifteen people, including six members of traditional Giriama dance troupe, and three Israeli nationals died. He was released after 2 years in prison due to lack of evidence.

Sheikh Rogo was previously arrested more than three times on terror related activities, the latest being early this year, charged with being in possession of firearms, ammunition and explosives with intent to commit a terror activity.

Aboud-Rogo Mohammed also known as Albadiri was a cleric in Mombasa for almost fifteen years.