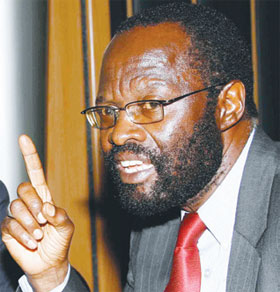 NATIONAL DIALOGUE NOT ABOUT JUBILEE & CORD
By Prof. P. Anyang’ Nyong’o,
When we talked about a national dialogue we never intended it to be between CORD and JUBILEE. Nor did we mean that it was a matter confined to political parties alone. It is a dialogue among the Kenyan people from all walks of life currently confronted by crises of unprecedented proportions.

Anybody interpreting the reaction of Jubilee as an affront to CORD is obviously missing the point. In its usual authoritarian reaction to any proposal addressing the popular concern of the Kenyan people Jubilee will obviously want to confine this dialogue to a corner where its tyranny of numbers will subvert a genuine national debate.

We in CORD are ready with our preparatory team which has embarked on consultations with stake holders en route to the national dialogue. We hope Jubilee will drop its arrogance and grandstanding and come along with the Kenyan people.

We invite religious leaders, trade unions, civil society organizations and the popular masses to join us to save this nation from collapse.

Prof Nyong’o is the Secretary General of ODM and senator from Kisumu County.