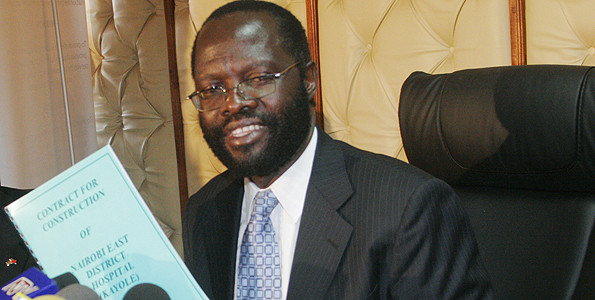 Prof Anyang’ Nyong’o will NOT defend his ODM Secretary General Seat, here is a statement signed by Prof Nyong’o:>

BUILDING THE ODM INTO THE FUTURE
“I have done the state some service,
And they know
No more of that.” Othello
From William Shakespeare, OTHELLO, THE MOOR OF VENICE, Act V, Scene II, (line 340-42).

Like Othello the Moor, I would like to say that I have done our party ODM some service, and our members know it; no more of that. The time has come to appreciate the achievements we have had since 2005 and the commitment of the party leadership to the noble goal of delivering a new constitution to Kenyans as a landmark of the Second Liberation.

ODM has indeed been the party of reform led by Raila Amolo Odinga as the indefatigable crusader for change over the past three decades. I am happy to have worked with him together with the national party leaders, and to have connected with grassroots leaders and the masses all over our Republic. Kenyans still look up to the ODM to keep the fire of change burning, and never to give in to the charlatans of reaction and the defenders of the status quo in our pursuit to live in a national democratic and prosperous society. Our agenda remains uncompleted.

The building of a national democratic and developmental state in Kenya will have to go beyond the democratic gains in the current constitution. It is urgent and necessary to dismantle the vestiges of presidential authoritarian rule in our society while also eliminating ethnic hegemonic politics in our political culture. Above all, however, ODM must be committed to the sincere construction of the politics of inclusion in our economy, our representative bodies as well as in all government institutions. Success in these endeavours will energise all Kenyans to contribute their best in national development.

On two occasions we have won elections and were robbed of our victory due to the greed and gross misuse of state power by the incumbents and vested interests in the authoritarian regimes we have always sought to liberate Kenyans from. With that in mind, it needs to be made crystal clear to all Kenyans that the struggle is still on, and that visionary leadership, and not simply leaders with a sense of entitlement, will be able to provide the political roadmap into our democratic future.

In or outside the formal structures of the party leadership I will always contribute to the democratic struggle and the Third Liberation. In that regard I see myself spending more time on policy issues for our party and CORD, and deepening collaboration between CORD and civil society on ideas, policies and programmes for inclusive politics and national development under a devolved system of government.

Let me therefore conclude that I have served two terms as ODM Secretary General. At the coming Annual Delegates Congress I will not offer my candidature for election. I urge those aspiring for this post to be civil in their campaigns, conscious of the party constitution and its policies, and always ready to prioritise strengthening of the party above individual ambition.