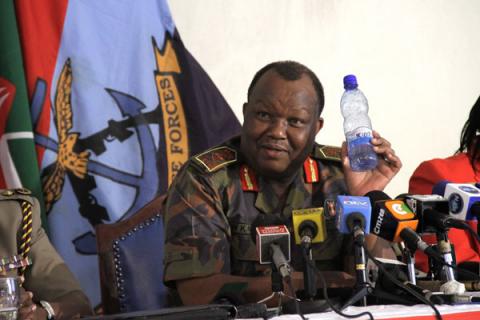 Uhuru sacked police boss David Kimaiyo and Interior CS Joseph Ole Lenku but kept on job Gen Karangi whose long stint at the helm of KDF has seen the once disciplined forces accused of all manner of transgressions in somalia thus increasing Al shabaab anger and attacks in Kenya.

KDF has been accused of selling charcoal and sugar from Somalia hence ensuring the Kenya-somali border remain porous to extremists and dangerous terrorists.

But the calls to fire top military commanders is so that it debunks the perception that members of a particular community in Kenya are untouchable and immovable even when their failures is pushing the country to its knees.
Ngewa Muhoro heads the Criminal Investigations unit in the Police Service , a portfolio that is fully responsible for failure to act on intelligence reports that were shared by local leaders. Truth be told, CID is the unit that failed Kimaiyo noted a top police cop who sought anonymity.