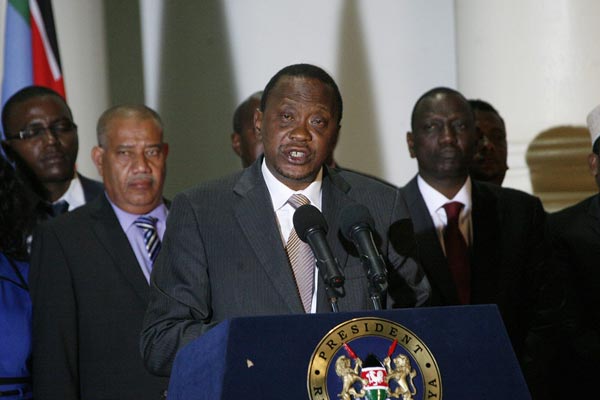 When the president addressed the nation on the matter of land in Lamu County, every Kenyan was waiting in awe to hear the president talk about land in coast beginning with Tiata Tavet, Lamu, Kwale, Mombasa and all the regions in the Coast and country. I though Uhuru Kenyatta had decided to listen to his big brother the Former Prime Minister Hon. Raila Amollo Odinga, who last week in Mombasa spill the beans on the causes of the insecurity in coast and laid the blame squarely on the land grabbers.

The Father of democracy was last week quoted saying that â€œdecades of land-grabbing are to blame for the ongoing violence in Lamu and other parts of the Coast and the solution is for those who grabbed the land to return itâ€.

I listened keenly and thought that the Ministry of Lands at last had decided to come clean with the matter of Land grabbing and historical land injustices and now we could know who owns the whole country and when they were going to return this stolen land to the people of Kenya and specifically to the squatters in coast.

As the president walked in to address the waiting nation I knew the President had been reading the TJRC report together with the Ndungu land report and he was ready to spill the beans and break ranks with the lords of impunity and land grabbers.

I knew the president had specifically looked at the section of the TJRC Report talking about the coastal land and specifically Lamu County which condemned the land settlement scheme of the 1960s in Mpeketoni.

I knew Charity Ngilu had read the section saying that the settlement scheme was â€œUn-procedural, dubious, and irregular”.

I knew Uhuru Kenyatta was interested in the section saying that the settlement scheme was the main cause of perpetual tensions and tribal strife in the area.

As a man who gives everyone a chance to redeem themselves and a benefit of doubt, I knew Uhuru Kenyatta had read all the chapters of this report and looked at the phrase â€œThe Jomo Kenyatta Presidency (1964-1978) engaged in setting up dubious settlement schemes that on the surface appeared to help locals, but in the end turned out designed specifically to help upcountry people with only about 15 to 20 per cent of indigenous and influential coastal people benefitedâ€.

I knew that being a digital government Uhuru Kenyatta looked at this report and was wondering why Kenyans had to go through all this kind of injustice 50 years into independence and as he read the section talking about â€œIn Lamu district, where a larger settlement programme was implemented, supported by aid from Germany, 10,000 members of the Kikuyu community were settled between 1969 and 1979, including ex-Mau Mau soldiers.Â The irregular move raised the population of the Kikuyu to 20 per cent in the district.”

I knew Uhuru decided to do the right thing and save these Kenyans from further suffering and humiliation, I knew son of Jomo was tired of this â€œelephant in the roomâ€.

When President Kenyatta finished his speech Kenyans were disappointed because it was clear to all that this was a political move meant to scare the opposition, divert attention from the failing security system and the inability of the Jubilee government to deal with insecurity and the desire of the ruling class to divert attention from the real owners of the grabbed coastal land.

It emerged that Uhuru advisors were hell-bent on transferring the blame of the land grabbing menace in the coast from the owners of that burden all the way from 1960s as the TJRC report observed to the Sen. James Orengo, who held the position in â€œMkate Nusuâ€ terms in 2008 to 2013.

In research when an investigation focuses on 1/50 of a problem under investigation then itâ€™s called a biased, incomplete and partial attempt at a study, which cannot produce valid and reliable findings. Why was the president interested in these side effects of the Lamu problem and not the root causes?

If Uhuru Kenyatta wanted to deal a blow the land problem in the coast, why didnâ€™t he look at all the counties including Mombasa, Kwale, Kilifi and Taita Taveta?

The answer is clear for all to see that the president was not interested in dealing with the land issue at the coast but lip service and propaganda; aimed at diverting attention from: the insecurity in Lamu, the real land grabbers in the whole coast province and Kenya at large and to insinuate that the opposition is part of the problem at the coast.

With such blatant and malicious outright propaganda by the government, Kenyans are left with no choice but better resolve to head back to the fight for final liberation, head back to the call for better governance and resolution of historical injustices.

Kenyans have now decided to go back to where we were in 2008; we go back to basics of agenda 4 and the historical injustices because the Jubilee government has abandoned agenda 4. From the pronouncement of the president who doesnâ€™t even have powers to cancel title deeds, it clear to Kenyans that this government is not interested in dealing with the historical injustices, they are not interested in implementing neither the TJRC report nor the constitution.

It is clear to Kenyans that This government is interested in perpetuating corruption, tribalism, land grabbing and abuse of human rights through bad governance, silencing opposing views, witch hunting and propaganda I want to remind Jubilee that Kenyans Kicked Moi after a long struggle with his KANU machinery and thatâ€™s why we brought in a new constitution for better governance, that constitution has an inbuilt mechanism for amendment and Kenyans have a right to continuously demand, transparency in public affairs and better governance from the leadership.

One of those legal means for demanding better governance is through a people driven referendum that CORD is now calling for. This call is part of what Kenyans were promised during the last referendum to iron out the 20% issues that were not good with this constitution and that we agreed to resolve after promulgation of this constitution.

From the way Jubilee has decided to unleash and rely on propaganda and mischief, This referendum has now moved from just a demand for over 40% of the national budget allocation to counties, review of electoral laws, reforms of the police force but the president has also brought in the issue of historical injustices including land grabbing as a main referendum issue. The president has made it clear that he does not respect the voices of Kenyans.

The president has made the resolve to move this talk from press conferences and boardrooms to the court of the people of Kenya in a referendum. I am not lawyer and my legal friends must now tell us how we can deal with â€œthe elephant in the roomâ€ in the public court at the referendum.

Richard Orengo is a Kenya Development Consultant and social researcher.