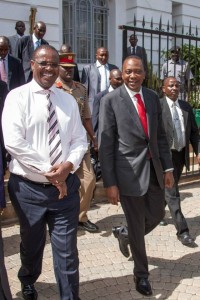 Governor Kidero had joined the president over the weekend for the Mashujaa Day celebrations. The meeting, with details still scanty, is the second in a week between President Kenyatta and the city Sherif.

Both leaders have maintained a cordial working relationship with little provocation, though rumours had it that top TNA officials had tried to use women rep Shebesh to test that relationship. Well, as in the public domain, Shebesh was slapped and handed down to Senator Â Sonko to mismanage further. The woman has since disappeared from the public limelight. 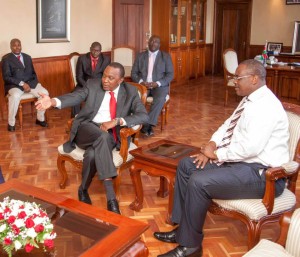 That one! President Kenyatta and Gov Kidero at the Governor’s city hall offices. [photo/PSCU]

The relationship between the two leaders often run into speculation. Dr Kidero has however sought to downplay such, insisting working with the president is a constitutional requirement, and I may add, a politically moral thing to do.

We wait to here whether the size of Ugali will increase for residents of the Capital city. If anything, the visit by the president should come with goodies, right?

More details when we get their sidekicks to speak to us. Of course we will.