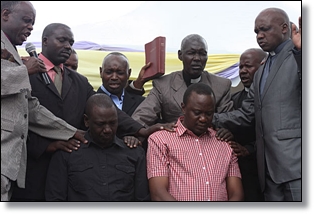 For some time now, there has been rallying calls for prayers among Kenyans. Leaders, both political and religious, have been putting pressure on Kenyans to pray for this country. But, I want you to listen to me. Those telling you to pray for Kenya are hypocrites, pretenders and political busybodies. I am not in any way disputing the power of prayers.

If you are a true Christian, Muslim, Hindu or any other religious organization that believes in the existence of a supreme creator, then you will agree with me that the call for prayers over Kenyan situation is the â€˜joke of a decadeâ€™. Letâ€™s be realistic folks.

The problems bedeviling Kenya are tribalism, corruption, insecurity and a bunch of political sins perpetrated by the political class of this country. Looking at these challenges, it beats logic why our leaders think that the only road to getting solutions is through prayers. Surely, do we need miracles do be performed for us to find answers? I donâ€™t think so. As I comprehend it, we pray over thing that are beyond our human reach and capabilities.

The essence of praying is to seek Gods intervention where supernatural powers are needed in order to fulfill a mission or complete a task. The Kenyan situation doesnâ€™t meet any minimum threshold. The problems we are facing now are a creation of the political class and it is time they are put to task to solve them. I believe Mr. Uhuru doesnâ€™t need prayers to ensure fair representation in the government. Itâ€™s time to hit the nail on the head without fear favour.

When those in government have failed, the tradition all over the world is to brainwash citizens and exonerate their names from any blame. In our Kenyan scenario, the political ruling class has chosen to mock God by pretending that Kenya needs prayers more that good leadership. This is madness! We saw it some years back when Uhuru and Ruto organized what they called â€˜prayer ralliesâ€™ â€“ they were in reality political – over their genocide cases facing them at The Hague.

According to them, they wanted God to spare sometime from His busy schedule to be physically present at the Hague based court. They thought crying in rallies would vindicate them. Now that they are in power, their acts and deeds are bringing this country to a near halt.

Kenyans should learn to take actions they believe will rescue this country. Wasting time yelling in churches and delivering hectoring speeches behind the pulpit wonâ€™t help. The partisan religious leaders like cardinal Njue have failed this country.

The only thing that will save this country from the wrath of tribal leaders like the ones we have now is for Kenyans to take actions that will show the leadership of this country that they are fed up with bad leadership, dictatorship and aristocracy practiced in this land; not yelling at God in the name of prayers. Jim Bonnie comments on topical issues