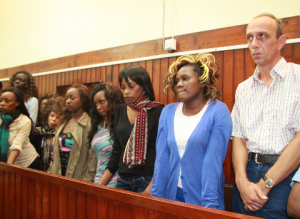 By: BY CALVIN ONSARIGO for the Star

Police on Wednesday denied reports that a dog was involved in the shooting of a pornographic video at an apartment in Nyali estate last week.

A Swiss national and eleven women were arrested at the apartmentÂ  while allegedly shooting theÂ  video. The twelve were initially reported to have been shooting the video with a dog.

However, Kisauni DCIO Shadrack Juma, who is leading the investigations dismissed the allegation.

Â ” To my knowledge no dog was found during the police raid,â€ said Juma. The Kisauni DCIO said it is unfair for the public to give false reports about the incident

The twelve were arraigned before Mombasa senior resident magistrate Richard Odenyo on Tuesday and pleaded not guilty to three counts of prostitution contrary to the Sexual Offences Act.

The Swiss, Christopher Clement Weissenrieder who faces three counts of exploitation of prostitution and was released on a Sh1 millionÂ  bond. The Kenyan ladies were released on a Sh100,000 bond each.

A Hearing has beenÂ  set for July 4. Juma said that the foreigner used to work with the United Nations and left about three years ago. According to police his passport indicates that he came to Kenya on March 1, this year.

“He was supposed to stay in the country for 90 days as he came as a tourist,â€ Juma said.