The popular Homa Bay senate candidate Silas Jakakimba has today 23rd December 2014 ditched the ODM party protesting the manner in which the party picked the flag bearer for the upcoming by election.

In an opinion poll conducted by the party National Elections Board, Jakakimba emerged top of the other six candidates followed closely by Engineer Philip Okundi and Fred Rabongo. Moses Kajwang was a distant 4th tying with local billionaire Caroli Omondi.

Despite Jakakimba proofing to the party that he was the mashinani sensation, the party settled for Moses Kajwang, a brother to late senator Gerald Otieno Kajwang’. Moses is only three weeks old member of ODM and has no previous links to the party other than being a brother to the late Kajwang’.

On the other hand Jakakimba has served the party since its formation in 2005, he co founded the the Nation Youth Vote Coalition in 2006 and later the Youth for Raila07. The later could later play a key role in the 2007 presidential campaigns that saw Raila win massive votes across the country.

Those who have worked with Jakakimba attest to his super loyalty to Raila and also resource mobilisation skills. Jakakimba is said to have introduced many donors who financed ODM to hundreds of millions.

Jakakimba has also served as Raila Odinga’s private secretary since 2006. He was instrumental in the 2007 elections especially in Kibera constituency where the then PNU activists Stanley Livondo who was backrolled by the state to rig out Raila Odinga as area MP a move that could lead to a technical knock out on winning the popular presidential vote against Mwai Kibaki. Jakakimba busted all the Livondo tricks and delivered the Kibera seat as Raila was busy with the presidential campaigns.

Jakakimba party loyalty has NEVER been questioned and he seem to act on good faith that Homa Bay county and ODM deserves a better candidate.

It is not the first time a party loyalist has ditched ODM to go independent or join other friendly party- Mombasa senator Omar Hassan is one such case, he was rigged out of the party nomination in favour of Ramadhan Kajembe, he joined Kalonzo’s Wiper Democratic Party and went on to win the senate race with a landslide. Same move was taken by Nyamira senator Okongo Mongare who is currently a Ford Kenya elected senator.

Immediately the party nominations board announced Moses Kajwang as the selected candidate, Jakakimba supporters in Homa Bay went to the streets protesting what they termed as unfair process, many argued that the mashinani sensation was discriminated because he doesn’t come from a big rich political family.

Blogger Robert Alai supported Jakakimba’s move and urged Homa Bay voters to reject the party candidate arguing that discriminating Jakakimba on the basis of his poor background is a mistake that only voters can correct on Feb 12th 2015. 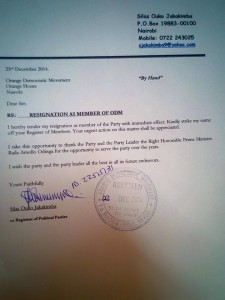