Nominated senator is seemingly preganat again after the Dubai drama. According to pictures available online, the senator has a baby bump. 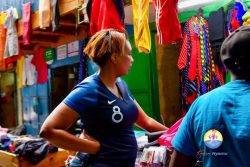 LAST WEEK
Nominated Senator Karen Nyamu has announced that she has ended her controversial relationship with Mugithi singer Samuel Muchoki, known for his stage name Samidoh.

On Saturday, Nyamu took to social media, saying she does not regret the scandal that had befallen her after being involved in a scuffle with Samidoh and his wife Edith during a Mugithi concert in Dubai.

“You know guys, I have no regrets from last night, I don’t wish I did things any different. I however promise you that this is the last time your girl will ever be involved in a situation like that ever again,” she wrote on her Insta stories.

Nyamu who has in the past been involved in public spats with Samidoh and Edday vowed to bring it all to an end by breaking up with the singer.

“Great and powerful women will attest that many times our weakest link is the men we get involved with. I am stopping the pattern. I have made a conscious decision to end for good my involvement with the father of my babies and now ex, Samidoh Muchoki,”

The publicised drama had raised concern from Kenyans that the Nominated Senator’s behaviour does not match theleadership position she holds.

On this, Nyamu clarified that she is aware of the responsibility bestowed upon her as a Nominated Senator, and that she treasures it and takes it seriously.

Her involvement with a Samidoh (a married man) had also led to Nyamu being branded names.

On the contrary, she said she described herself as a good woman who has only been proving a point.

‘I don’t love drama and I don’t wreck homes,” she said.

In addition, Nyamu said her conduct in Dubai was as a result of alcohol intoxication, vowing to quit in the new year.