NEW YORK – Thousands of victims of the Kenyan case involving President Uhuru Kenyatta have added to the government ongoing tribulations at the ICC when their lawyer, Fergal Gaynor, wrote a very stern letter to the United Nations Security Council warning of the legal consequences of granting Uhuru a 12 month deferral.

The victims claim granting Kenyatta his request will make the UNSC make such approvals each year for the period the Uhuru will legible for being the president of Kenya which, should he win successive election, can run up to the year 2023.

“If theÂ KenyattaÂ trial is delayed until Mr. Kenyatta finishes his term of office 2018, or, if re-elected, in 2023, there is a real risk that the interests of the victims will be totally extinguished. The voice of the victims must be heard on this issue. They were not invited to address the recent AU summit in Addis Ababa, nor toÂ address theÂ Security Council,” reads part of the letter.
Â “In meetingsÂ in KenyaÂ with hundreds of victims of the crimes charged in theÂ KenyattaÂ case over the past few months, victims have told me of the appallingly brutal treatment which they suffered during the post-election violence in January 2008, of the Kenyan Governmentâ€™s ongoing failure to help them, and of their great distress at efforts by Mr. Kenyatta to avoid trial.”
The victims claim the Kenya government government has no political will to bring post-poll suspects to justice. Despite numerous promises, the victims see no effort by Kenyan authorities to prosecute nor justly compensate them. They instead, claim that the accused, Mr Kenyatta, continue to devote ‘huge state resources at the international levels to bring his trial – their only hope of justice – to an end’.
According to Gaynor, should UNSC grant Uhuru’s request based on Kenya’s demand that the council invokes article 16, the government of Kenya may use that single premise to demand for excusal on annual basis till Uhuru leaves power; and the UN will be obliged to grant such requests.
The victims said such a scenario would be ‘regrettable’ as it would require the Kenyan Government to “summon together evidence in order for it to be able to convincingly argue, each year for the next decade, that there exists a threat to international peace in â€œthe Horn of and Eastern Africaâ€.
The victims claim the government would then only strive to prove that a threat to peace exists. Already in Kenya, sceptics argue that the sporadic violence which has engulfed most parts of the country are ‘manufactured’ to add to Kenya’s narrative that both the country and the region are volatile and unstable and that subjecting Uhuru to trial only degenerates the situation into a crisis.
“To protect the powerful and delay or deny justice to the powerless should notÂ become the role ofÂ the Security Council. But theÂ suggestion that serving heads of state and government should be immune from international justice was recently approved by the AUâ€™s heads of state and governmentÂ despite the fact that one of the AUâ€™s founding principles is the â€œcondemnation and rejection of impunity,â€ reads the letter.
“The issuance each year of a Security Council resolution exempting Mr. Kenyatta from trial will send forth an even stronger message of impunity,” adds the letter.
President Uhuru’s case which was due to commence on November was pushed to February under circumstances which has baffled observers of the case, vowing to the fact that the second accused, also an executive member of the ruling government, already has his case ongoing.
Other Kenyans also wonder why only the President and Deputy seem to get personal reprieve from the ICC unlike the third accused, radio journalist Joshua Arap Sang, whose request last week to return to Kenya and attend his younger daughter’s graduation (sic) from Kindergarten to primary school was denied.
The letter has been copied to the 15 states sitting on the Â UNSC Â as well as ICC prosecutor Fatou Bensouda and Uhuru’s lead counsel Stephen Kay, QC. 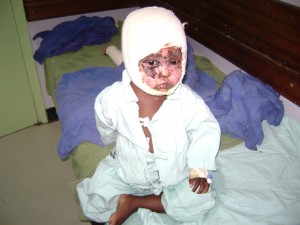 An unidentified burned, bandaged baby one of of Kenya’s PEV victims. [photo/jrjf.wordpress.com]