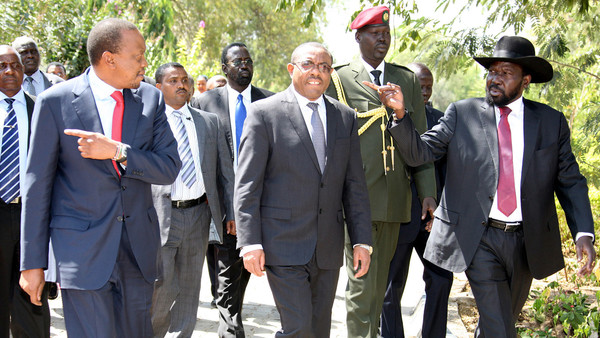 The New Year gift for President Kenyatta may come early if he succeeds (definitely he will) to reconcile the two south Sudanese Warlords. The president jetted to Juba this morning to fulfill one of Kenyaâ€™s responsibilities in this fragile region of the Horn of Africa.

The negotiations that Kenyatta will get down on will prove an important point on Kenyaâ€™s place in the security agenda of this region. The diplomatic offensive by Kenyattaâ€™s government that eventually won Africa on the deferral of Kenyaâ€™s ICC cases was based on Kenyaâ€™s incomparable positioning in the regions security.

The diplomatic charm offensive by Kenyaâ€™s delegation extrapolated the Security argument to cover Kenyaâ€™s commitment on the war on terror which has continuously put Kenya in a sticky place and amongst the targeted states by terrorists.

The war in South Sudan may just be a blessing in disguise for the government of President Kenyatta. This is an opportunity for Kenyatta to practically demonstrate to critics what he meant. Kenyatta should be prudent enough to accumulate Kenyaâ€™s diplomatic finesse in conflict resolution to assert Kenyaâ€™s role on peace and stability.

Kenya should demonstrate that the point was not flaunted in the United Nation Security Council to merely endorse African Unionâ€™s plea of Kenyattaâ€™s case deferral. There is no doubt that Kenya due to her relations with South Sudan is expected to do whatever is within her reach to restore peace in that country.

In international politics we say that states are peers but in all manner and definition Kenya is Southern Sudanâ€™s big brother; their flag may narrate half of the story. The conflict in Juba presents a very dicey situation. This conflictâ€™s principal agitators are venting out decades old grievances.

It is battle on perceived entitlements between two demagogues who are determined to whip up tribal animosity to meliorate their bargain for power. Kiir wants Dinkas to believe that through him they are in power while Machar wants Nuer to think that the whole community has been isolated after he was sacked.

Due to this lie poor Dinkaâ€™s and Nuers are rising against each other while their demigods enjoy in the best hotels in East Africa and their children get educated in the best schools. Kenyatta will have to take the bull by its horns to bring a long lasting peace that may only be found in a new progressive constitution for the Africaâ€™s youngest nation

Kenya oversaw the Comprehensive Peace Agreement that ushered South Sudan to independence, it is now a good idea under Kenyattaâ€™s presidency to shape the discourse of a new constitution in that country which will be a catholicon to the political, social and political grievances.

In 2007/8 when Kenyaâ€™s history of grievances reached to its peak, we promised to write ourselves a new constitution to mend our differences and apportion our grievances.

Through the war we wrote ourselves laws to govern us and hopefully our generations. The conflict in South Sudan should not go to waste. They have fought for quite too long. A lot of innocent blood has been shed but 2014 should dawn to South Sudan with hopes of a new era. A new era for them to write laws that will ensure peace and posterity to all regardless of tribe and creed.

Kiir is accused of frustrating the Constitutional Review Commission that was supposed to deliver a constitution by 2014. Kiir is also incriminated of evading democratic elections and attempting to rule South Sudan like a personal Kingdom. This is dangerous for a 21st century state.

If Kiir and Machar continue to harbor the ideas of their great grandfathers in the endeavor to maintain and acquire power respectively South Sudan will burn. The gist of Kenyattaâ€™s message must be that of selflessness and establishing the interest of the country as cardinal.

The egos of the two must diminish completely. For Kenya to emerge as a Champion of peace and Security Kenyatta must restore South Sudan on the track. He must rally all the heads of state in the region to broker for a peaceful and enduring political settlement. The spirit of Garang the founding father of SS must take toll in the negotiations.