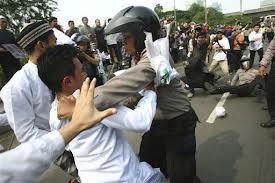 Fifteen people were killed and nearly 200 injured in Pakistan on Friday as angry protests that have raged all week against a blasphemous US film mocking the prophet MUhammad continued to engulf the Muslim world.

There were violent demonstrations in Pakistan after the government took the questionable decision to declare a national holiday to allow people to rally against the video. Tens of thousands took to the streets in all major cities. Many protests descended into serious unrest. Protesters threw objects at police, who retaliated with teargas canisters and live rounds.

The provocative US trailer, Innocence of Muslims, also prompted protests in at least half a dozen other countries on Friday, with demonstrators burning American flags and effigies of Barack Obama. The unrest capped a tumultuous 10 days that has seen the murder of the US ambassador to Libya, Chris Stevens, in what the White House says was a well-plotted terrorist attack, possibly linked to al-Qaida.

The film has caused a deep crisis for the US administration. It has also provoked a pained discussion in Europe and the US over the boundaries of free speech. Several of the latest protests were also directed at France after the satirical weekly Charlie Hebdo published fresh Muhammad caricatures.

France took a tough line on protests on Friday, with the interior minister, Manuel Valls, saying no demonstrations against the cartoons would be allowed. Paris closed its embassy in Egypt, where a few dozen protesters congregated on Friday. Germany also shut its Egypt mission.

But it was Pakistan that saw the most inflammatory scenes. Some 195 people were reportedly wounded in the cities of Peshawar, Karachi and Islamabad â€“ with nine killed in Karachi and four in Peshawar. One of the Karachi dead was a policeman. He was apparently killed in an exchange of gunfire with protesters. Unknown gunmen also shot and wounded three other policemen.

In Peshawar, the frontier city close to the Afghan border, mobs attacked buildings and set fire to cinemas. One victim, Muhammad Amir, was the driver of broadcast truck owned by the television network ARY. He was hit by police fire. He later died of his wounds in hospital but not before the television station broadcast continuous loops of him in obvious pain being attended to in an emergency room.

In Karachi rioters torched police vans, looted shops and even attacked the coastal port city’s fire brigade. For a second day running in Islamabad, the normally sedate capital, violence was concentrated in front of the five-star Serena hotel,situated on a road that leads to the entrance to the fenced-off diplomatic quarter where the US embassy is located.

"America has challenged the Muslim nation by making this movie," said a 19-year-old called Mohammad Fayyaz, who kept his face covered as he joined the violence in the capital. He added: "We will not go until the man who made the film is hanged."

The White House has made desperate efforts over the past week to defuse the protests. Speaking on television and radio adverts, the US secretary of state, Hillary Clinton, has emphasised that the US government had nothing to do with the film’s production. The acting US ambassador in Pakistan, Richard Hoagland, met with government officials to once again to reiterate that the US government "condemned this video’s content and its message".

But the US’s vigorous campaign of public diplomacy appears not to have worked. In many places in Pakistan, crowds were able to break through barricades placed in their way by police. Images streaming in from all over the country on Pakistan’s frenetic cable news channels got steadily grimmer as what the government had billed as "love of prophet Muhammad day" wore on and protests descended into battles and looting.

Mobile phone networks had been turned off in 15 cities in an effort to frustrate the ability of crowds to organise themselves, but it appeared to have no effect and services were restored well before the originally advertised time of 6pm. In Lahore, the grand colonial era Mall Road was the setting for skirmishes by demonstrators who also attempted to approach the US consulate in the city.

In Iraq about 3,000 protesters condemned the film as well as the French caricatures. The protest in the southern city of Basra was organised by Iranian-backed Shia groups. Some protesters raised Iraqi flags and posters of Iran’s supreme leader, Ayatollah Khamenei, while chanting "death to America".

In the Sri Lankan capital of Colombo, about 2,000 Muslims burned effigies of Obama and US flags at a protest after Friday prayers. In Bangladesh, over 2,000 people marched through the streets of the capital, Dhaka, to express outrage at the film. Small and mostly orderly protests were also held in Malaysia and Indonesia.

Thousands also gathered in Lebanon’s Bekaa valley for the latest in a series of protest rallies organised by the militant group Hezbollah. There was also unrest in Indian-administered Kashmir. Police imposed a day-long curfew in the Kashmir valley, and in the main city, Srinagar, police chased away protesters. Authorities in the region also temporarily blocked mobile and internet services.

Critics in Pakistan lambasted the decision of the government to make Friday a national holiday. They said hardline religious parties, many of them fronts for banned terrorist organisations, hijacked the day off as a chance to show off their street power.

Raza Rumi, a prominent analyst and newspaper columnist, said the government had chosen a policy of appeasement. "The government is under immense pressure to appear as Islamic and as pious as anyone," he said. "But it could have chosen alternative strategy of engaging with the various religious groups and launched a public campaign to educate people rather than letting them take to the streets."

Earlier in the day, Pakistan’s prime minister, Raja Pervaiz Ashraf, addressed a gathering of politicians and top clerics in Islamabad. While he called for peaceful protests, he also used language likely to inflame the many protests that have claimed the video is part of a plot involving Jewish, Israeli and US interests. "It is ironical that denial of holocaust is considered a crime but no consideration is paid to the feelings of Muslims," he said. "I hope the international community and Islamic world will be successful in preventing such things."

If the intention of the government was to burnish its Islamic credentials in the run-up to the election in six months, many protesters were not convinced. "[President Asif Ali] Zardari is a man with no grace, he should resign," said Tabarak Lateef, a 22-year-old protester in Islamabad. "Our rulers are traitors, they are American slaves and they should be ashamed of themselves."