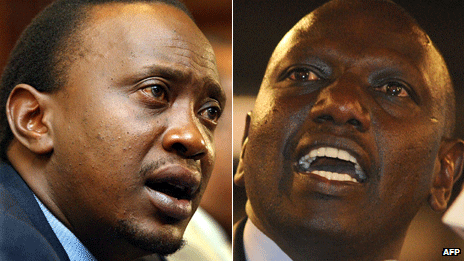 WHEN former Juja MP George Thuo was buried yesterday in Thika, he became the eight ICC insider to die since 2008. Like Thuo, these insiders dealt directly with the ICC in their official capacities, or they knew a lot about the post election violence in 2007/8 that left 1,400 people dead.

They took to the grave crucial information that could have helped the country to finally unravel the unanswered questions surrounding the post election violence.

Kenya has opposed an amendment proposed by the ICC on Rules of Procedure and Evidence that would allow the prosecution to introduce prior recorded testimony during trial.

The ICC Chief Prosecutor could then bring to the court prior recorded testimony of a dead person.What secrets or crucial information did they have?

He died a week ago after he collapsed while having drinks with friends at a club in Thika town at about 10 pm. He was a former MP for Juja and ex government chief whip. Thuo was expected to be a key witness for President Uhuru Kenyatta at the ICC.

The ICC Chief Prosecutor had claimed that Thuo had attended a meeting at Blue Post Hotel in Thika on January 27, 2008 where revenge attacks were allegedly planned for Naivasha and Nakuru.

Thuo was expected to testify that any violence was spontaneous and Uhuru did not have anything to do with the Naivasha and Nakuru killings. The former MP had repeatedly denied any wrongdoing.

He died in February 2012 after a heart attack. Michuki was the minister for Internal Security and Provincial Administration when the post election violence after the controversial swearing in of President Mwai Kibaki at State House Nairobi on December 30, 2008.

He continued serving as Internal Security minister as the country burned until January 8, 2008 when Kibaki named half a cabinet and handed Michuki the docket of Roads and Public Works.

He died in June 2012 after a police helicopter crashed and burst into flames at Kibiku, Ngong forest. His assistant Orwa Ojode, two bodyguards and two police pilots died with him. Saitoti took over as Internal Security minister from Michuki at the height of the post election violence in January.

During the pre trial hearings, Bensouda said that government officials held a second meeting to plan retaliatory attacks in the Internal Security minister’s office in mid-January.

Saitoti also at one point simultaenously served as acting Foreign Affairs minister and was a key member of the National Security Advisory Committee.

In July 2009, Saitoti was appointed to head a special cabinet sub-committee to oversee the affairs of the ICC in the country.Another members of the bi-partisan committee was Mutula Kilonzo.

Mutula was found dead in his Maanzoni home in April, 2013. At the time of his death, he was Senator for Makueni County. He was appointed as Nairobi Metropolitan Development minister when the coalition government was formed in April 2008.

He was later appointed Justice and Constitutional Affairs minister in May 2009. As Justice minister, Mutula pushed for the creation of a credible witness protection agency for high profile cases. He asked Treasury to set aside Sh1.2 billion to form the agency.

He also opposed Uhuru and William Ruto standing in the presidential elections arguing that they should first clear their names at the ICC. In June 2012, Mutula told Parliament that he had received two messages from unknown people threatening to kill him. He claimed that he was removed from the Justice ministry to Education because of his stand on ICC trials.

Kimeli was murdered by unknown people in April 2011 at his house in Muguga Greens estate in Westlands. During the 2008 post election violence, Kimeli was the boss of the Kenya Police College, Kiganjo, where meetings were allegedly held to discuss how to respond to the violence.

His killers entered his house, stabbed him several times and left the well secured estate where some of Kenya’s top civil servants live. His gun was found lying by his side. Neighbours said they did not hear any commotion.

He reportedly testified to the Waki Commission that investigated the post election violence. His testimony, presented to the commission in camera, may have formed part of the evidence that ICC chief prosecutor Luis Moreno-Ocampo used to boost his case.

In May 2011, Police spokesman Erick Kiraithe stated that no evidence had been found linking Kimeliâ€™s killing to the post election violence. However Kiraithe said that police had written to the ICC asking whether Kimeli was going to be a witness.

Kimeli was a close friend of then Deputy Commandant of the Administration Police Oku Kaunya who is now in exile and may be a prosecution witness during the ICC trials.

He mysteriously disappeared in 2008 and is presumed dead. He was the Mungiki leader named by the ICC prosecution as having attended a meeting at State House to plan the Naivasha revenge attacks.

On July 6, 2008 Diambo and two Mungiki colleagues were reportedly called by a politician to collect Sh3 million donation for the burial of Mungiki leader Maina Njenga’s wife Virginia Nyakio.

Nyakio was killed together with her bodyguard and driver in mysterious circumstances on March 8, 2008. Their bodies were recovered in Gakoe forest in Gatundu.

The day before Diambo disappeared he had allegedly received the first donation in a briefcase from the same politician at a government office. Diambo was accompanied to the first meeting by brother Charles Ndungu Wagacha and George Njoroge Wagacha who were later murdered in Mai Mahiu. At the first meeting, they allegedly received Sh3 million to deliver to Njenga, then incarcerated at Naivasha Maximum Security Prison.

The Wagacha brothers, together with Naftaly Irungu, were shot dead as they drove to Naivasha on April 29, 2008. Another Mungiki member in Central Province, Alfred Peter Njoroge, went missing around the same time. Njoroge had earlier been arrested and charged in connection with hate leaflets distributed in Muranga town in 2007.

Kones was the Roads minister and Bomet MP and Laboso was assistant Home Affairs minister and MP for Sotik when they died in a plane crash on June 10, 2008 at Kojong`a area of Nairegi-Enkare in Narok North.

They were on their way to Ainamoi constituency to campaign for ODM candidates in a by-election. The by-election was caused by the death of area MP Kimutai Too who was shot dead by a traffic police officer in Eldoret during the post-election violence.

Kones and Laboso were named in the original report ‘On the Brink of the Precipice’ by the Kenya National Commission on Human Rights as key perpetrators of post election violence in the Rift Valley. They were accused of financing the Kalenjin youth who attacked the Kikuyu and Kisii in Kericho.