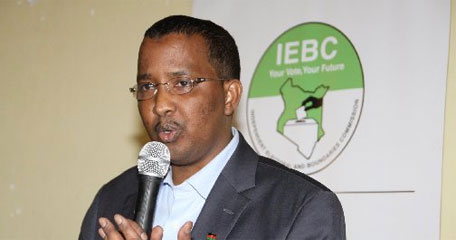 Contrary to rumours doing rounds on social media, IEBC Chairman Hassan Isaack is NOT dying, he is NOT critically ill nor is he being flown out of the country for specialised treatment in the Netherlands, he is in the office discharging his duties normally!

“He is in office and today i have met him twice and spoken to him once on intercom and yes you can quote me” James oswago IEBC chief Executive told a reporter of a leading local TV station.

For the past several days there has been rumours on social media that Isaack Hassan had been admitted to a hospital in Nairobi with a critical heart problem.

“Isaack was a little unwell, just like anybody else, he has no heart condition and has not been admitted in hospital” a commission official told this reporter on Monday

“You journalists and bloggers mko fake sana (you are not real), the guy is good and well, he did not lie to parliament, so stop the rumour about him dying because of lying during Ramadhan” the commission official added.

Isaack and his IEBC team refused to take oath before a parliamentary committee when they presented a report of the the March 4th election several weeks ago.

Given Oswago’s confirmation it is obvious that rumour on Isaack’s failing health was started haters, Isaack’s popularity among Kenyans noze dived having failed to lead the country to a free and fair elections.

Well, we wish Hassan good health as he struggles to regain goodwill from kenyans after supervising an alleged electoral fraud in the March 4th general election.