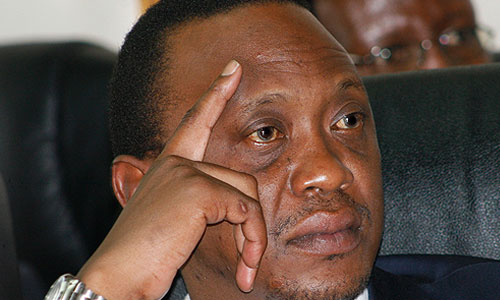 All his life Uhuru has had a certain idea of Kenya. That it is a monarchy in all but name. It is an idea inherited, like â€˜ndugu zanguniâ€™ phrase, from his father. Kenyatta Sr. might have ruled in the 20th century but his temperament and approach to leadership was very much a 19th century. Many of those who analyzed his presidency agree that it was more of a Kings reign rather than a presidents.

Kings consolidated their powers by marrying in important families and so did Kenyatta. How else do you explain his marrying spree of daughters of Kikuyu colonial chiefs?

In retrospect, Moi too had the same idea. But he did not look at himself as an alternative monarch. Rather he largely viewed his position as that of a regent. His was merely to keep the throne warm until the real heir to the throne came of age. And that he did. It was therefore no accident that in 2001 he plucked the prince from the jaws of anonymity and made him next in line.

The reign of the prince was thus delayed but not denied. The new president quickly came to terms with the reality. That he, like Moi, was a merely â€˜keeping the shopâ€™ till the real owner was ready.

Last year the prince was finally coroneted in pomp and color like a French king in Versailles. As the Bible would have put it was the â€˜passingâ€™ of â€˜It Was Writtenâ€™. Expectations were great- double digit economic growth, knowledge based economy etc etc. Those who expected great leadership have been thoroughly disappointed. Well, they say great expectations make frustrated men but these ones have been on wholly different level. One year down you need a week of constant pondering to point out any achievement of this government.

Ruto, who was most vocal on these promises, is now silent on them like he was put in a witness protection program. Uhuru himself is clueless everywhere. Both his foreign and domestic leadership has been like a circus before the Caliph. Propaganda has replaced solid policy, symbolism replaced action. Where strong leadership is required he has decided to remain undecided. Confusion reigns everywhere and the centre is inspiring less and less confidence with each passing day.
Picture this: he promised his â€˜legislative agendaâ€™ within 100 days would be â€˜transformativeâ€™. Nothing worth of note except the Media Bill has come of that â€˜agendaâ€™.

Kenyatta Sr. tolerated no criticism and so is the son. As an English poet put it â€˜the son is the father of the manâ€™. Silver or lead- money or bullet- used to be the motto of drug lord Pablo Escobar in dealing with politicians and security people.
For Uhuru it is silver or silver. Everyone has a price. And no journalist is too expensive for a man who in the game of money plays in the same league with Russian oligarchs. The Media Bill was however meant to deal those who might skip through his money net. Few have so far managed to do that. On that front he has been dizzyingly successful!

The elephant in the room: tribalism. Facing a country with deep ethnic rifts created to artistic perfection by the father, Uhuru began in the spirit of â€˜charity for all and malice toward noneâ€™. A year later he has staffed most of the senior departments in the government to such an extent that official meetings now closely resemble a Karatina Sacco meeting.

And that is not all. On corruption, wage bill among a whole lot of other issues he has shown ineptness, incompetence and hypocrisy. There was a joke about the former US president Richard Nixon that he could â€˜cut down a tree, stand on the stump and preach environmental conservationâ€™. Such has been Uhurus hypocrisy thus far on almost anything he has tried to tackle.

In matters foreign policy he has not fared well either. Instead of positioning himself to get the best of both worlds he let his ego of an oversize rodent get the better of him. He kicked the West but the kicks were not those of Achilles but those of a drowning man. Then he packed his briefcase and headed to the East with a retinue of Coolies of all shades carrying all sizes of begging bowls. Empty handed he returned but the media, always in his bank, hyped the â€˜billions in investmentâ€™ received. We are yet to see anything from Maoâ€™s land except dirty deals.

Such has been the sorry state of Uhuruâ€™s governance. Many might ask why after conducting such a poetic campaign Uhuruâ€™s governing has been so prose. The answer is simple- Thus far the son of Jommo has used a manual of ruling from his father with Moiâ€™s handwritten notes on the margins. They have not worked for one simple reason: the expiry date was not checked. Kenya has changed. The tactics of the past cannot bring desired results today. We have become more globalised and more informed. Now we know our rights better.

The days when the presidents will was law are long gone. Days when threats were enough to cow people into submission and towing the official line are dead and gone. The days when mediocrity could be sustained by misinformation on KBC are gone too. We are in a new era. We know exactly what we want from the government- bread and no circus.